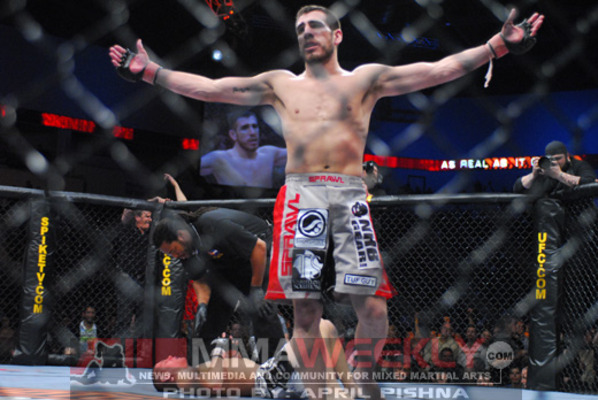 Kenny Florian is ineligible for regional rankings due to inactivity.
Fighters must have at least one completed MMA bout in the past two years to be ranked.

Florian is the fourth of six children born to Peruvian parents; Agustin, a thoracic surgeon, and Ines Florian. His ethnic background includes: Armenian, French, German, Italian, and Spanish ancestry. Florian was born in Westwood, Massachusetts and grew up in neighboring Dover, Massachusetts where he was a standout soccer player for Dover-Sherborn Regional High. He attended Boston College where he played for the varsity soccer team (NCAA Division 1). He also holds dual citizenship in the United States and Peru.

A popular native of Boston, Massachusetts, Kenny Florian first rose to prominence on the debut season of the popular Spike TV reality show “The Ultimate Fighter,” making it all the way to the live finale while competing in a division thirty pounds above his optimal fighting weight. After losing to Diego Sanchez in the finale in 2005, Florian reeled off back-to-back submission victories over Kit Cope and Sam Stout—both of them by Rear Naked Choke—before challenging for the lightweight belt against Sean Sherk in 2006. Following a decision loss to Sherk, Florian redoubled his training efforts and vowed to make his way back to the title. He did just that, with an impressive six-fight winning streak, finishing the likes of Din Thomas, Joe Lauzon, Roger Huerta and Joe Stevenson along the way, before losing to champion BJ Penn in August of 2009.

A black belt in Brazilian Jiu-Jitsu and an experienced Muay Thai fighter, Florian has combined excellent ring movement with an uncanny sense of distance and timing to effectively dismantle some of the greatest lightweight fighters in the world. Like many of modern MMA’s top fighters, Florian has trained with multiple camps in order to advance his skillset, including Mark Dellagrotte’s and Renzo Gracie’s gyms in Massachusetts and New York, respectively. Florian has an extraordinary knack for cutting open his opponents with sharp inside elbow strikes, a skill he can repeat with some regularity. His approach to fighting is scientific and professional.

Florian was the first fighter to dominate and finish UFC veteran Clay Guida inside of two rounds, and he has said that his commanding victory over former Pride sensation “The Fireball Kid” Takanori Gomi – once again by RNC – was his proudest win to date. Florian is articulate and intelligent, with a burgeoning MMA announcing career developing alongside his exploits in the cage. “Kenflo” has called live fights for the UFC and appeared regularly on ESPN in advance of big UFC Pay-Per-Views. That, and his willingness to fight relentlessly even in his rare losing efforts, have made him one of the world’s most respected and popular fighters in the lightweight division.

Ultimate Fighter Finale Diego Sanchez def. Florian by TKO at 2:49 of Round 1

Interview  |  Behind the Lens with Kenny Florian report dead link

Watch this video interview with Kenny Florian from Fight! Magazine.