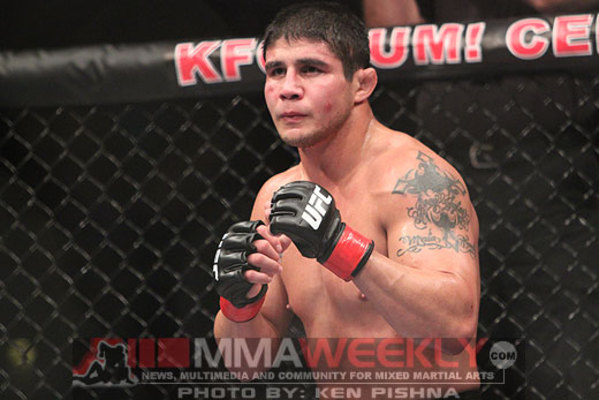 Joe Stevenson is ineligible for regional rankings due to inactivity.
Fighters must have at least one completed MMA bout in the past two years to be ranked.

A black belt in both Brazilian Jiu-Jitsu and Judo, as well as an experienced amateur wrestler, Joe “Daddy” Stevenson showed serious promise when he made his MMA debut in 1999, compiling a 23-6 professional record over the next five years. Stevenson finally caught his big break in 2005, when he participated in and won the welterweight tournament of The Ultimate Fighter 2. Since winning the tournament and dropping to the 155 lb. division, Stevenson has consistently been among the top ten fighters in the UFC lightweight division. He has defeated notables Yves Edwards, Melvin Guillard, Kurt Pellegrino, Gleison Tibau, Nate Diaz, and Spencer Fisher during his run with the promotion, as well as contended for the lightweight title in 2008 in a loss to BJ Penn.

Stevenson is at his best when he relies on his wrestling and submission grappling experience. He has finished almost half of his professional fights by way of submission. Stevenson is so powerful a grappler that he is able to finish chokes on opponents even when they are not locked in perfectly, simply as a result of his crushing strength. Stevenson has also made strides in his boxing game in recent years.

Episode 4 Stevenson def. Marcus Davis by Submission (Elbows) at 4:10 of Round 1

Episode 12 Stevenson def. Jason Von Flue by Submission (Armbar) at 4:46 of Round 1