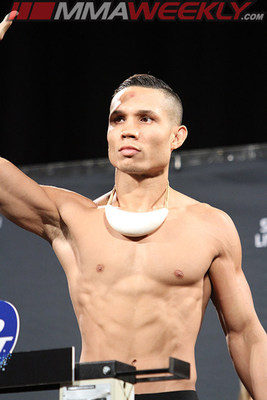 Fighting for a major organization has made Jon Tuck ineligible for regional rankings.

Jon Tuck is a lightweight fighter currently signed to the UFC. He is a brown belt in Brazilian Jiu Jitsu which he used to earn a gold in 2010 at the World Professional Jiu Jitsu in the open light division as well as a silver in the under 78kg division. Tuck has a 7-0 professional record holding a notable victory over Eduard Folayang who he knocked out in 8 seconds. Of his seven wins, six have been finishes in the first round with equal numbers of submissions and T/KOs.

Jon's early career was primarily in his native Guam and the surrounding countries. He battled to a 6-0 record before earning a spot on The Ultimate Fighter: Live in 2012.  He fought Al Iaquinta to try and make it into the house but would lose the decision and be eliminated by the eventual finalist. Tuck also suffered a badly broken toe in the fight which he looked down at to check out at one point during the fight to see that it was bent in the wrong direction.

Despite not making it on to the show, Jon was called back by the promotion. He made his official UFC debut at UFC Macao against Zhang Tie Quan. This would be the first fight of his career that would go to a decision which he was able to pick up over the prospect. He was supposed to fight TUF: The Smashes winner, Norman Parke in April 2013, but an injury would force him off the card. The two eventually met at UFC Fight Night 30 in Manchester England but Tuck would end up dropping the unanimous decision.

On 7 June, 2014, at UFC Fight Night 42, Tuck faced UFC newcomer Jake Lindsey, after Yosdenis Cedeno backed out of their fight citing a groan injury. Tuck defeated Lindsey via submission at 2:47 in the final round.

Tuck's next fight was against his toughest opponent yet - Kevin Lee, at UFC 178: Johnson vs. Cariaso, on 27 September, 2014. It was an exciting fight, with both fighters making good exchanges throughout the bout. During Round 2 however, Tuck kicked Lee in the groin and was deducted 1 point. This put Tuck in a desperate position for the final round. He came out aggressive, but was still unable to defeat Lee. The judges awarded the victory to Lee in a UD. This brought Tuck's UFC record to 2-2.