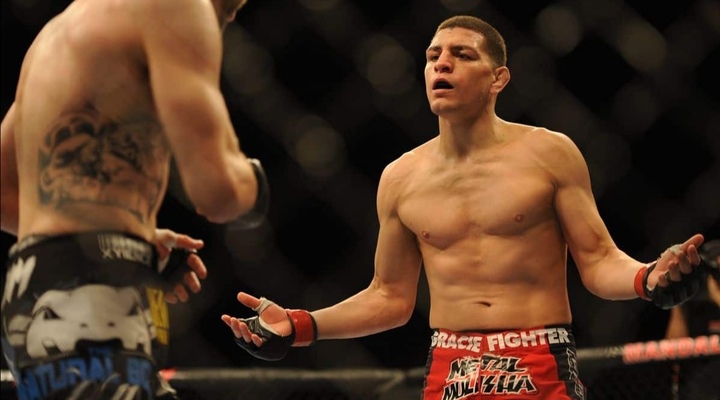 Fighting for a major organization has made Nick Diaz ineligible for regional rankings.

One of MMA’s most unique personalities and a constant lightning rod for criticism, Stockton, California’s Nick Diaz first made his name fighting on the local California circuit, defeating UFC veteran Chris Lytle to win the IFC Welterweight Title in 2002. Diaz entered the UFC in 2003 with an armbar victory over Jeremy Jackson, and quickly established himself as one of the standout talents of the welterweight division, combining an expert-level Jiu-Jitsu game with crisp, stinging boxing.

Diaz also emerged as one of the organization’s most incendiary fighters, displaying brash, trash-talking bravado and nasty in-cage antics in his battles with elite MMA fighters like Robbie Lawler, Karo Parisyan, and Diego Sanchez. Many of his stories are now legendary, including the tale of his UFC 57 fight with Joe Riggs, which resumed in the emergency room of the local hospital following the event while the two fighters wore medical gowns and intravenous drips. Diaz and Riggs both confirm the account.

After leaving the UFC in 2006, Diaz fought in various promotions, most famously defeating Japanese star Takanori Gomi -- at that time considered by many the world’s best lighweight -- via a sensational gogoplata following a wild, barn-burning affair. However, the result was overturned and declared a No Contest after Diaz tested positive for extremely high blood THC levels, suggesting that he was high during the course of the fight.

Since that time, Diaz has gone on to compete for the California-based Strikeforce promotion, defeating the likes of Frank Shamrock, Scott Smith, and Marius Zaromskis, all of them by TKO, to win the vacant Strikeforce Welterweight Championship.

A Brazilian Jiu-Jitsu black belt under Cesar Gracie, Diaz has one of the most polished grappling games in the welterweight division, having defeated Josh Neer by kimura in addition to his famed gogoplata of Gomi. But it is his awkward and punishing boxing style — aided in recent years by an increase in his overall size and strength — that has vaulted Diaz into the top tier at 170lbs. The bottom line is that after all of the bravado, Diaz comes to fight. He is a regular triathlete outside the cage who brings extremely high endurance levels to his fights, and pushes a pace with a high-energy striking game that always inflicts more damage than it would appear on camera.

Nick signed back with the UFC in 2011 and was set to face the welterweight champion Georges St. Pierre at UFC 137. However Diaz no showed the press conferences for the fight and Dana White made the decision to pull him from the fight and let Carlos Condit fight for the belt. Condit was supposed to fight BJ Penn on that same card so instead they matched Diaz up with Penn. Diaz would go on to beat Penn via Unanimous Decision and in another twist to the story GSP was injured and could no longer fight Condit. Now the UFC set up Diaz to fight Condit for the Interim UFC Welterweight Title. Diaz lost a Unanimous Decision in a close fight, Diaz clearly upset with the judge's decision said he was all done and would be retiring from MMA. Diaz then tested positive for marijuana metabolites and was thus banned for 1 year from competition. Diaz has since spoken out saying he does want to return to the octagon even calling out Anderson Silva in the process.

Diaz would make his return at UFC 158 when he would finally get inside the octagon to face Georges St. Pierre for the title. Diaz would lose a Unanimous Decision as GSP's wrestling would prove to be too much for him to contend with.

In July of 2013, in an interview with Dana White it was revealed that Nick Diaz had in fact retired from mixed martial arts competition. There was briefly a rumored fight between Nick and Michael Bisping, however that failed to materialize. Following Matt Brown's back injury that forced him to withdraw from his bout with Carlos Condit at UFC on Fox 9, Diaz was offered the rematch with Condit. To no avail to bring him out of retirement, it was turned down.

Attending UFC 170, Nick Diaz had told the media that he would return to MMA competition for an immediate title shot. On July 28th, 2014 it was revealed that Nick had a new undisclosed contract with the UFC.

Due to high demands from the fans, a super bout with former UFC middleweight champion Anderson Silva was agreed upon and was set for January 31st, 2015 at UFC 183 on Super Bowl weekend. Leading up to the fight Diaz refrained from his normal trash talking and the two fighters seemed to have complete respect for each other. However once the bell rang Diaz would start his normal trash talking right off. He even went so far as to lay down on the mat against one of the greatest fighters. Silva would eventually win a decision after five rounds. Following the fight it was revealed that Diaz had failed his post fight drug test for marijuana metabolites.

On March 15th 2015, Aleksey Mishin (Olympic Greco-Roman wrestling gold medalist 2004) posted on reddit that he was looking for a BJJ black belt to train him. After only one day,  Nick Diaz, a Cesar Gracie black belt, accepted.

Watch Nick Diaz announce his desire to return to fighting in 2014.

Watch this short documenary on Nick Diaz from Fight! Magazine.