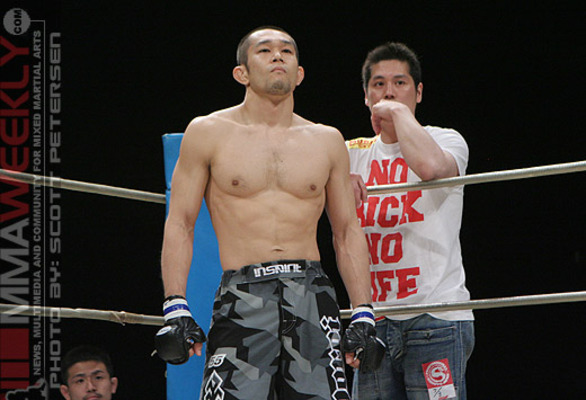 Rumina Sato is ineligible for regional rankings due to inactivity.
Fighters must have at least one completed MMA bout in the past two years to be ranked.

Rumina Sato is a long time veteran of MMA and is a legend of the Shooto organization. He has mostly fought in the 155 division but has recently dropped to the 145 weight class. Sato holds notable wins against Yves Edwards and Bao Quach. Rumina has  gone up against other top fighters such as Caol Uno, Takanori Gomi, Gilbert Melendez, Hatsu Hioki, and Masakatsu Ueda among others.

Sato is known for his aggressive style. Standing up he wings strikes and even throws up submissions, on the mat he is relentless with his submission attempts. His most well known fight is his 5 second flying armbar victory over Charles Diaz. Sato has also competed in many grappling competitions. He won in a grappling superfight at the UFC 100 Fan Expo Grappler's Quest by defeating Ulysses Gomez by submission. In the 2000 ADCC, Sato went up against Tito Ortiz. Sato ended up losing by North-South Choke against the much larger Ortiz.
The Shooto legend is returning to the scene of his first venture outside the Shooto organisation when he faces off against Hideo Tokoro as Vale Tudo Japan 2012.

A stylish highlight video of Rumina Sato by one of the best underground video makers out there, Hero1, aka Oliver Sha Productions.

Another highlight video of Rumina Sato.