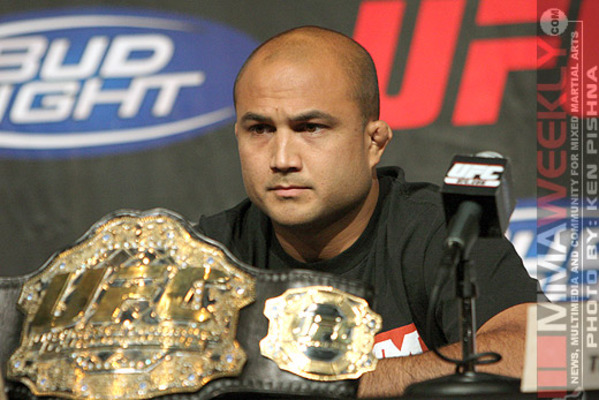 BJ Penn is ineligible for regional rankings due to inactivity.
Fighters must have at least one completed MMA bout in the past two years to be ranked.

Before entering professional mixed martial arts competition, Hilo, Hawaii’s BJ “The Prodigy” Penn was a world-class Brazilian Jiu-Jitsu practitioner, earning his black belt under Andre Pederneiras in 2000. That same year, in Rio De Janeiro, Penn made history by becoming the first non-Brazilian to win the World Jiu-Jitsu Championships. Penn earned his trademark nickname, “The Prodigy,” for accomplishing his extraordinary feat of sport Jiu-Jitsu after only a few short years of mat time. It would turn out to be the the first of Penn's many displays of stunning martial arts virtuosity.

With substantial buzz already surrounding him, Penn made his professional MMA debut in 2001 for the UFC, where he quickly lived up to his prodigious moniker by dispatching his first three opponents, including respected lightweight veterans Din Thomas and Caol Uno, in the first round. After a setback to then-champion Jens Pulver in 2002, Penn went on a seven-fight unbeaten streak from 2002-2004, defeating notable fighters Matt Serra, “The Fireball Kid” Takanori Gomi, Matt Hughes and Rodrigo Gracie in the process. His upset of the bigger, stronger and seemingly impervious Hughes by choke-out earned Penn the UFC welterweight title.

After business disputes with the UFC derailed his title reign, forcing his abdication of the belt, Penn embarked upon a bizarre, if fascinating, stage of his career, accepting fights in various promotions all over the world with top level fighters of any weight class, including then-undefeated light heavyweight and future UFC champion Lyoto “The Dragon” Machida at 205 lbs., a full fifty pounds over Penn’s optimal fighting weight of 155 lbs.

Penn found mixed success upon his re-entrance into the UFC as a welterweight in 2006, and would soon drop to his natural—and original—155 lb. weight to take the UFC Lightweight Championship in 2008. He became only the second fighter in MMA history behind Randy Couture to win major titles in two different weight divisions. Penn’s lightweight reign thereafter was marked by a new found commitment to strength and conditioning preparation, and solidified his pound-for-pound legacy. Penn's two consecutive losses to the younger and quicker Frankie "The Answer" Edgar spelled the end of his long championship reign. While some fans questioned the legitimacy of the decision in their first encounter at Abu Dhabi, which Edgar won by a razor close margin, their rematch later in 2010 was a decisive victory by Edgar, and a reminder that it had been a long time since Penn had faced a hungry up-and-comer. Following the loss of his title, Penn vowed to fight more often and in varying weight classes.

Late in 2010 Penn lived up to that vow as he moved back to the Welterweight division to face rival Matt Hughes in their rubber match at UFC 123.  Penn made quick work of Hughes by connecting with a stiff right in their first exchange that sent Hughes to the mat a few follow up strikes earned Penn the 21 second win and besting Hughes 2 fights to 1 in their 3 matchups.

Penn continued his stay at Welterweight as he saw former title challenger Jon Fitch as his next opponent at UFC 127 in Sydney, Australia.  The first 2 rounds saw the undersized Penn surprise everyone including Fitch as it was him who was looking for takedowns which he actually saw some success.  Penn even had some submission attempts as he briefly was able to take Fitch's back on 2 occasions and attempt a rear naked choke.  By the time the 3rd round came around though it was Fitch who was the dominate fighter as he was able to avoid Penn's striking and get the Hawaiian on his back and defending some near fight ending ground and pound.  Although it was Fitch who was the stronger fighter at fight end only one judge gave the fight to him at a 29-28 score with the other 2 judges giving the fight a 28-28 score which ended the fight in a majority draw.

After a series of changes and injuries Penn's next opponent ended up being former Strikeforce Champion Nick Diaz who was entering his second stint with the UFC.  The first round saw Penn competitive in the standup and threatened very briefly to take Diaz's back in a scramble.  The rest of the fight though saw Diaz take control as his pace, conditioned mixed with boxing and reach overwhelmed Penn as Diaz took the Unanimous Decision with scores of 29-28, 29-27, and 29-28.  In his post fight interview a battered Penn claimed "I've got a daughter, another daughter on the way, I don't want to go home looking like this, I'm done."

As many suspected, Penn's retirement was some what short-lived as only a few months past before rumors started to swirl of a returning Penn to the octagon. Those rumors proved to be truth as Canadian prospect Rory MacDonald was slated to be Penn's next opponent in a fight that was scheduled to take place in September at UFC 152 in Toronto Canada.  A cut during training to MacDonald  delayed their matchup to December 2012 at the UFC on Fox 5 card in Seattle, Washington.

Combining a granite chin with incredible flexibility and balance, Penn is not only one of the most difficult fighters in the world to finish, he is also one of the most accurate and damaging boxers in the sport, holding wins over the aforementioned Hughes, as well as Renzo Gracie and top lightweights Joe Stevenson, Sean Sherk, Kenny Florian, and Diego Sanchez. Renowned boxing trainer Freddie Roach has publicly stated that Penn is MMA’s best boxer. Penn holds the distinction of being undefeated at lightweight for over 8 years, with never having a lightweight fighter score a takedown or pass his guard. Also, regardless of continuously moving up in weight classes, including bouts at welterweight, middleweight, and heavyweight, Penn has never been knocked down by strikes in his entire career.

In short, in a sport teeming with world-class athletes Penn simply rises above the fray, displaying a grace, precision and fighting instinct that can seem otherworldly. Despite his typical posture of easy tranquility during the course of a fight, it is not unusual to see Penn’s opponents exiting the Octagon badly bloodied, and in some cases simply mutilated, by the onslaught. Penn is regarded as one of MMA’s all-time greatest pound-for-pound fighters. One of Hawaii’s biggest celebrities, with a thriving website at bjpenn.com, he also has one of the largest and most avid fan bases of any fighter in the world.

Another BJ HL vid by RVCAMan.

An older highlight reel of "The Prodigy" focusing on his best early moments. A classic from the vault.

RVCAMan looks at BJ Penn's return to the lightweight title in his "Redemption" highlight video.