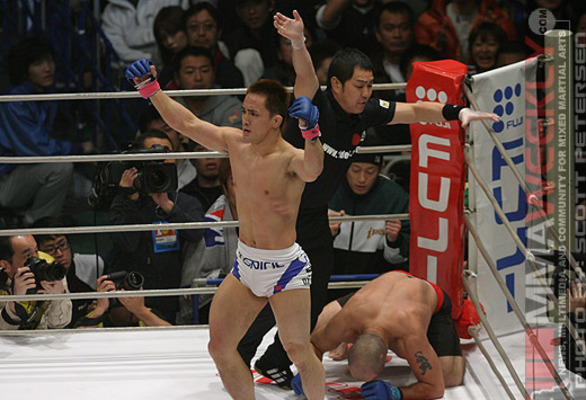 Mitsuhiro Ishida is ineligible for regional rankings due to inactivity.
Fighters must have at least one completed MMA bout in the past two years to be ranked.

Mitsuhiro Ishida made his professional MMA debut in 2001, and racked up a 10-2-1 record while competing for the Shooto organization. In his last fight with the promotion before joining the Pride Fighting Championships, Ishida defeated Kenichiro Togashi to win the Shooto Pacific Rim Championship belt.

Ishida had a successful run following his 2006 debut with Pride, winning his first four bouts with the promotion, including wins over Marcus Aurelio and Cristiano Marcello. In his fifth bout for the organization, Takanori Gomi finished Ishida for the first time in his career, but he rebounded with his biggest win to date by handing future Strikeforce Lightweight Champion Gilbert Melendez his first career loss, using superior wrestling against a very good wrestler in his own right.

While Ishida has shown that he has serious power in his hands, the vast majority of his professional wins have come by way of decision. Some have criticized his fighting style, but Japanese fans have given Ishida the nickname “The Endless Warrior” because of his relentless pace and ability to fight through adversity. He is unique among Japanese fighters in that he fights with a more Americanized, freestyle wrestling-based fighting style that few other native Asian fighters employ.

Ishida announced on his personal blog on July 6, 2012 that he was retiring from mixed martial arts competition.

MMA filmmaker Genghis Con gives us this video highlight package featuring "The Endless Fighter," Mitsuhiro Ishida, in his best moments in the ring and cage.