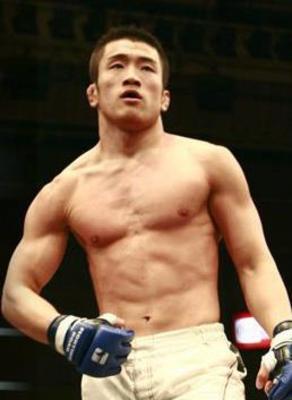 Tae Hyun Bang is ineligible for regional rankings due to inactivity.
Fighters must have at least one completed MMA bout in the past two years to be ranked.

Tae Hyun Bang is a Korean lightweight fighter currently signed to the UFC. He trains out of Seoul, South Korea. He has previously held lightweight titles in Neo Fight and DEEP and has fought for Sengoku and M-1 as well. Of his sixteen professional wins, eight have been finishes with all coming by way of T/KO.

Seung Hwan "Macho" Bang started his MMA career in 2004 with the G5 and Neo Fight promotions. After going 9-3 in his first three years of competition, Bang got an offer to compete in the larger DEEP promotion. He lost his first fight in DEEP to Seichi Ikemoto via unanimous decision but bounced back with four straight wins under the promotion to earn a title shot against then champion, Kazunori Yokota. In an upset, Bang knocked out Yokota in the first round and became the DEEP Lightweight Champion. He would not defend his title however, as he vacated it in August 2008 To move to the Sengoku promotion. Bang would lose his next two fights against heavy hitters Takanori Gomi and Jorge Masvidal, both by decision. Later he would take time off from MMA to compete in boxing. After a couple of boxing matches, he would come back to MMA in 2010 and would go 1-1 upon his return.

Bang left MMA in 2010 to fulfill his mandatory two year military service. There was little news as to whether or not he would come back to MMA until in September of 2012, he resurfaced and gave an interview with mfight.co.kr saying, "I have been offered some fights. I will make a decision soon on what organization I am going to fight in. I got done with my army service on September 21. All I have done in my life is mixed martial arts. I plan on training for a fight very soon. I have been working on dropping down to featherweight, and I plan to fight professionally as a featherweight." He would ultimately come back at Top FC 1 in June, 2013 against Joo Dong Hwang in the lightweight division. He was supposed to fight Frank Camacho at PXC 41, but the fight would be cancelled when both fighters missed weight.

Bang was picked up by the UFC in late 2013. He took on Mairbek Taisumov at UFC Fight Night 34 in Singapore but would lose the fight by unanimous decision. He would bounce back in exciting fashion as he finished Kajan Johnson by TKO in the 3rd round at UFC 174 also earning Knockout of the Night as well as Performance of the Night.