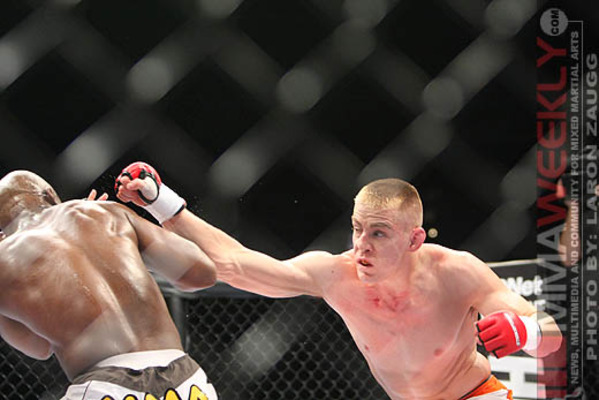 #60
Greatest MMA Striker of All Time

Duane Ludwig is ineligible for regional rankings due to inactivity.
Fighters must have at least one completed MMA bout in the past two years to be ranked.

Prior to entering the world of professional mixed martial arts in 2000, Duane Ludwig was a professional boxer and kickboxer. The experience made him one of the most technical strikers in MMA in his early years in the sport. During his decade-long career, Ludwig has fought for many of the top promotions in the world, including Strikeforce and the UFC, and holds notable victories over Charles Bennett, Jens Pulver, Jonathan Goulet, and Yves Edwards. Though he has worked hard to overcome it, Ludwig’s fighting weakness has always been his ground game.

Followers of the sport perhaps know Ludwig best for his knockout victory over Goulet, which is considered the unofficial fastest knockout in UFC history. Although the official time was stopped at 0:11, the knockdown occurred just four seconds into the contest.

"Bang!" once fought Shad Smith in a King Of The Cage bout that appeared to go on longer than necessary, as he was running a "Muay Thai clinic" on his opponent, according to announcers Ricco Rodriguez and Don "the Dragon" Wilson. As it turns out, Shad Smith had complained that referee Larry Landless had stopped a previous fight of his too soon so this time Landless made sure that complaint would not be replicated. What ensued was one of the most devastatingly one sided fights in KOTC/MMA history.

Watch this short documentary clip to get a glimpse at the incredible coaching of Duane "Bang" Ludwig.