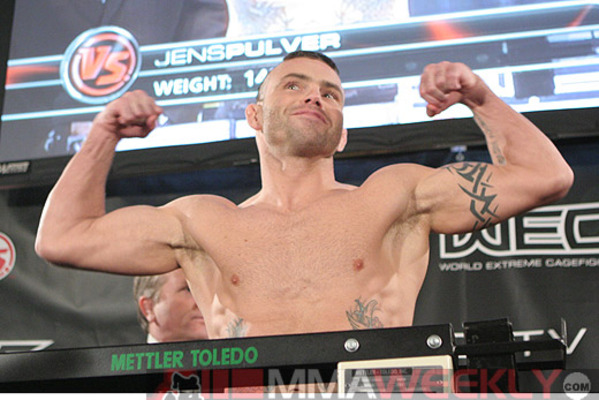 #98
Greatest MMA Fighter of All Time

Jens Pulver is ineligible for regional rankings due to inactivity.
Fighters must have at least one completed MMA bout in the past two years to be ranked.

Jens Pulver, who emerged from a troubled childhood, learned the MMA ropes under the legendary Pat Miletich and the MFS Elite program based in Bettendorf, Iowa, at a time when that camp housed only the toughest of the tough. “Little Evil” made his professional debut in 1999 and ran his record to 8-2-1 in local promotions before being invited to join the Ultimate Fighting Championship in 2000.

After defeating John Lewis in his UFC debut with a memorable, on-the-button first-round knockout, Pulver won the first-ever UFC Lightweight Championship by defeating Caol Uno by Majority Decision. Pulver then defended the title twice, against Dennis Hallman and BJ Penn, respectively, winning both by decision. Following his victory over Penn—the biggest in his career—Pulver left the UFC and competed in various shows around the world, including the Pride Fighting Championships in Japan.

Pulver returned to the UFC in 2006 as a heavy favorite against up-and-comer Joe Lauzon, and was showered with adulation from UFC fans upon entering the arena. His welcome inside the Octagon was considerably less friendly, as Pulver was knocked out in the opening moments in a deflating turn of events. That loss began a streak in which Pulver lost seven out of his next eight bouts, prompting him to announce and then rescind his retirement more than once as the disappointments mounted.

In his prime, Pulver was one of the most powerful strikers in the lightweight division, usually picking his foes apart with technical boxing before closing the deal with a legendary left hook to the chin. His quickness and ability to sprawl out of trouble and keep the fight standing was reminiscent of another of his contemporaries, 205-pounder Chuck Liddell, who used the strategy to great effect in subsequent years. Part of Pulver’s difficulty in leaving MMA behind in the twilight of his career has been the enormous love and gratitude shown to him by fans, and Pulver’s obvious love for the sport which defined the early part of his life.

Pulver's story has been showcased in at least two books, one of which was an autobiography written with the assistance of Erich Krauss entitled "Little Evil: One Ultimate Fighter's Rise to the Top."  This autobiography gives a gripping, no holds barred glimpse into the dark childhood of Jens Pulver - how he overcame staggering adversity and developed the indomitable spirit of a warrior that we have come to know as Little Evil.  The other being entitled "Never," written by Timothy Mckinnon, tells the story of a struggling Pulver later in his career, and the support group that helped him through those dark moments.  Pulver was also featured in a documentary entitled "Driven", directed by Gregory Bane, which was funded primarily by fan donations online, and is now available on DVD.  Driven follows Pulver in his efforts for a comeback after four consecutive losses in the cage.