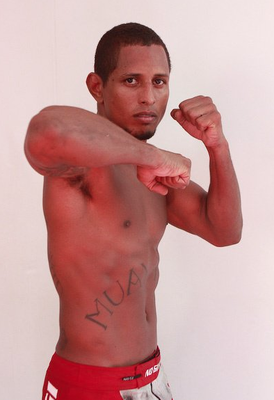 Fighting for a major organization has made Johnny Eduardo ineligible for regional rankings.

Johnny Eduardo was born on 3 August, 1978, in Rio de Janeiro, Brasil. Eduardo is currently fighting out of Rio, signed with the UFC in the Bantamweight Division,

Eduardo began fighting in 1996, amassing a professional record of 27-9-0, with 20 of his wins coming from finishes.

Eduardo has spent most of his career fighting in local promotions around Rio de Janeiro, only fighting outside of Brasil twice; at Shooto R.E.A.D. in 2000 and Bellator 3 in 2009, before being signed to the UFC.

Eduardo made his UFC debut against Raphael Assunção on August 27, 2011 at UFC 134. He lost the bout via unanimous decision.

Eduardo was expected to face Michael McDonald on November 19, 2011 at UFC 139. However, Eduardo was forced from the card with an injury and replaced by Alex Soto.

Eduardo was expected to face Yves Jabouin on March 16, 2013 at UFC 158. However, on March 6, Eduardo was forced to pull out of the bout citing a shoulder injury. Jabouin was then pulled from the card as a suitable replacement could not be found on short notice.

Eduardo was expected to face Lucas Martins on November 9, 2013 at UFC Fight Night 32. However, both fighters were removed from the card due to injury.

After almost two years out of the cage, Eduardo returned to the UFC to face Eddie Wineland on May 10, 2014 at UFC Fight Night 40.Despite being a significant betting underdog, he won the fight via KO in the first round. The win also earned Eduardo his first Performance of the Night bonus award.