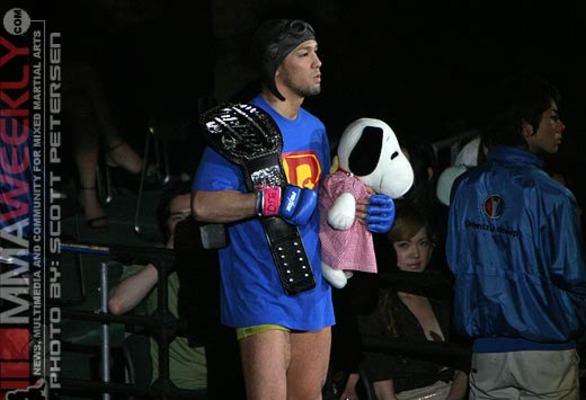 Yoshitomi Mishima is ineligible for regional rankings due to inactivity.
Fighters must have at least one completed MMA bout in the past two years to be ranked.

Dokonjonosuke Mishima is a Japanese MMA fighter born on April 19, 1972 in Hyogo Prefecture, Japan. Mishima is most commonly known for his charisma, entertaining entrances that usually feature objects such as masks and stuffed animals and exciting fight style.

Mishima fights in both the lightweight and featherweight divisions. He has a judo background and he trains at the Cobra Kai MMA Dojo.

Before become a pro fighter, Mishima went undefeated in his MMA amateur career, defeating all 4 of the opponents he fought finishing 2 of them by submission.

Mishima spent most of his early career competing in Shooto where he had a successful run and where he fought big names such as Din Thomas and Takanori Gomi, before moving onto DEEP and fighting sporadically in PRIDE. During his first run in DEEP, Mishima fought at lightweight and he won the DEEP lightweight title by defeating Tomomi “TAISHI” Iwama at DEEP 18 IMPACT.

After a series of fights in DEEP, Mishima vacated the lightweight title as he was picked up by the UFC. Mishima’s previous career success however didn’t transfer over to the UFC, as he lost both of his UFC fights by submission to UFC veterans Joe “Daddy” Stevenson and to Kenny “Ken Flo” Florian.

After being inactive for 2 years, Mishima made a MMA return defeating Takeshi Yamazaki by unanimous decision at GRABAKA LIVE! 1st CAGE ATTACK.

Aside from his MMA record, Mishima also has competed in other combat sports such as various grappling, BJJ, tag team MMA, exhibition against men and women, pro-wrestling, judo and taekwondo.