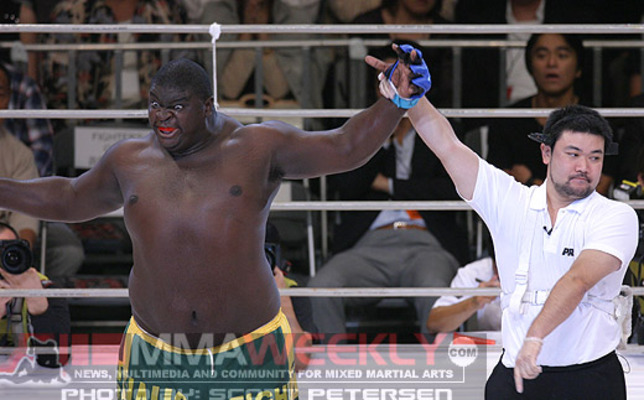 MMA fighter Wagner da Conceição Martins, now universally known as Zuluzinho (or "Little Zulu"), is the son of the legendary early Vale Tudo fighter Casemiro Nascimento Martins, better known as "Rei Zulu" or "King Zulu," who famously fought Rickson Gracie two times in losing efforts in front of massive crowds. Rei Zulu's son Zuluzinho holds something of a cult status among MMA fans for a combination of his striking appearance (Zuluzinho is anything but "Little") and his lackluster record in Pride, where he went 1-3 over the course of four fights. Zuluzinho was truly fed to the lions of Pride, losing by crushing first round knockout to the legendary Fedor Emelianenko, and by armbar to Minotauro Nogueira.

Despite an unimpressive Pride run, Zuluzinho has assembled serious MMA credentials which are no laughing matter. He holds a purple belt in Brazilian Jiu-Jitsu and has an unofficial underground MMA record far more impressive than the record reflected by his sanctioned bouts. Zuluzinho was reported to have won 38 fights in a row by knockout in Brazil prior to much of his legitimate MMA competition (the number cannot be verified). A massive physical specimen with obvious power, Zuluzinho continues to fight from time to time in smaller promotions to this day. His greatest win to date came against Ikuhisa Minowa in a K1 bout in which Minowaman was outweighed by well over 100 pounds.