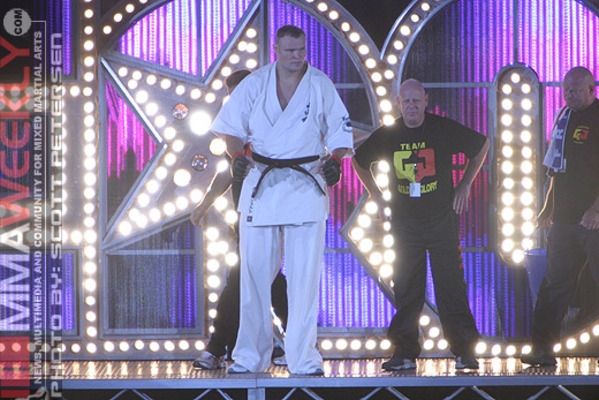 #65
Greatest MMA Striker of All Time

Semmy Schilt is ineligible for regional rankings due to inactivity.
Fighters must have at least one completed MMA bout in the past two years to be ranked.

Although his accomplishments in mixed martial arts competition pale in comparison to his achievements in professional kickboxing and K-1 tournaments, Semmy Schilt has been competing in both sports since the mid-90s. Schilt made his professional MMA debut in 1996 and holds career victories over veterans such as Guy Mezger and Ikuhisa Minowa, although he usually outweighs his opponents by a significant margin in the ring. Schilt has also faced some of MMA’s toughest fighters, most notably “The Last Emperor” Fedor Emelianenko, in Fedor’s 2002 Pride debut.

More impressive than his MMA resume is Schilt’s accomplishments in the realm of professional kickboxing, where he is an all-time great. Schilt has won K-1 World Championships every year since 2005, including several wins in the annual K-1 World Grand Prix. Schilt holds notable kickboxing victories over contemporaries such as Remy Bonjasky (three times), Ray Sefo (twice), Peter Aerts (twice), and Badr Hari, among others.