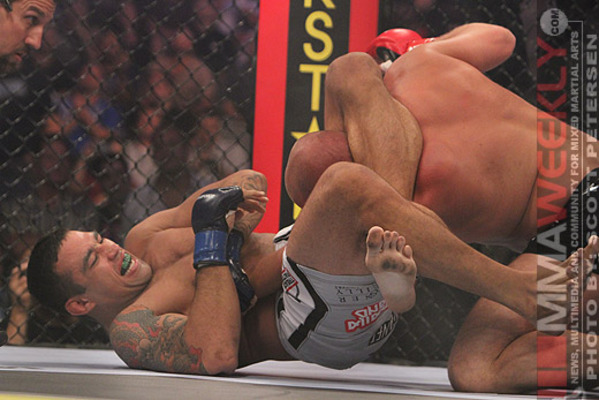 Fighting for a major organization has made Fabrício Werdum ineligible for regional rankings.

Long considered one of the most gifted Brazilian Jiu-Jitsu fighters in MMA, Fabricio Werdum was unable to crack the upper echelon of the world top ten rankings for many years. After first gaining attention as the Jiu-Jitsu trainer of Mirko Cro Cop, he lost a close decision to highly rated Antônio Rodrigo Nogueira. Unquestionably a highly skilled fighter, Werdum held career victories over world class talent like Gabriel Gonzaga (twice), Aleksander Emelianenko, Antonio Silva and Alistair Overeem, yet continued to dwell beneath the radar in the minds of many fans. Few thought of him as a legitimate threat to take a major world title in the heavyweight division, especially after being knocked out by a then unknown Junior Dos Santos resulting in his termination from the UFC.

That all changed when Werdum was matched up with the greatest heavyweight fighter in MMA history, Fedor Emelianenko, in June of 2010. Werdum entered the fight as a massive underdog, but he exuded confidence in the days leading up to the bout. At just 1:09 into the contest, Werdum accomplished what ten years of great fighters had failed to accomplish, forcing “The Last Emperor” to tap out to a tight Triangle Choke/ Armbar combination that left the MMA world in shock. The victory was not only the most significant of Werdum’s career by a large margin, but one of the most important in MMA history, and signaled the passing of an era in the heavyweight division. The sky is now the limit for “Vai Cavalo,” who is assured top billing for at least a few years to come. However, Werdum did not have the same success immediately after the fight, first missing about a year with a shoulder injury. When he returned he lost a close decision in the Strikeforce Heavyweight Grand Prix to Alistair Overeem.

Prior to his trials in professional mixed martial arts competition, Werdum was a world-renowned Jiu-Jitsu practitioner, having won world titles in the BJJ World Championships and the ADCC heavyweight division. Werdum reportedly began his life in the martial arts after being humiliated by getting beat up in front of his girlfriend. Fast forwarding to two decades later, that embarrassed young man is now a professional MMA fighter with a win over Fedor Emelianenko.

Like almost every Brazilian, Werdum used to play soccer. He was a defender, this position is also known as "Vai Cavalo" (Go horse) in Rio Grande do Sul (State that he grew up). That's how Werdum got his nickname by being very good defender in soccer.

Werdum returned to the UFC in 2012 with a Unanimous Decision victory over Roy Nelson that was also the Fight of the Night. He would follow up with a first round TKO of Mike Russow. Werdum would then face off against Big Nog in the finale of the second season of the Ultimate Fighter in Brazil. Werdum was able to submit Nog in the second round by a submission only the second time Big Nog had lost by submission.

A video of Fabricio Werdum receiving his black belt in Muay Thai from Rafael Cordero.