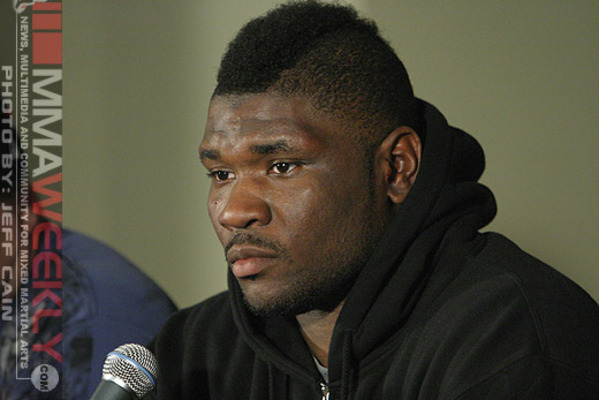 Brett Rogers is ineligible for regional rankings due to inactivity.
Fighters must have at least one completed MMA bout in the past two years to be ranked.

Brett Rogers first came onto the MMA scene in 2006, winning five straight fights on the local Minnesota circuit before joining the now-defunct EliteXC promotion in 2007. There, he defeated “The Colossus” James Thomson, among others, to bring his record to a perfect 8-0 as a professional. After the collapse of EliteXC in 2008, Rogers joined the California-based Strikeforce promotion, defeating Abongo Humphrey by knockout due to knees in the second round to keep his unbeaten record intact.

On June 6, 2009, Rogers fought the biggest name of his professional career to date when he took on former UFC Heavyweight Champion Andrei Arlovski in St. Louis, Missouri, and in a stunning upset, Rogers defeated Arlovski by knockout just 22 seconds into the fight.

Following his fight with Arlovski, Rogers was granted a highly coveted bout against the legendary “Last Emperor,” Fedor Emelianenko, on the first-ever Strikeforce event broadcast on CBS. Rogers accounted himself well, breaking the champion’s nose with his first jab of the fight, and inflicting heavy damage on Emelianenko for the remainder of the round. Rogers was then knocked out in the second round for his first professional MMA loss.

The slide continued when Rogers was granted a title shot against the returning Strikeforce Heavyweight Champion, “The Demolition Man” Alistair Overeem, and lost via strikes in the first round in a lopsided affair. Nevertheless, Rogers moves well for a big heavyweight, has clear one-punch knockout power, and has an enviable level of public awareness due to high profile fights relatively early in his mixed martial arts career.

After the loss to Overeem he would participate in the Strikeforce Heavyweight Grand Prix, but would be eliminated in the very first round of the tournament by the master grappler Josh Barnett, who dominated Rogers on the ground before submitting him in the second round with an arm triangle choke. Rogers' career seemed to never recovered after that loss and he would alternate wins over outmatched competition with uninspired losses by going 3-4 in his next 7 fights.

In his latest appearance, Rogers faced Evgeny Erokhin for the Far Eastern Federation of Modern Pankration promotion. The entire fight was contested on the feet with Rogers losing via knockout in the later stages of round two.

The All Elbows video team brings us this lighthearted look at top heavyweight Brett Rogers in a rap video cover of "I Got the Power" featuring Rogers's own lyrics.