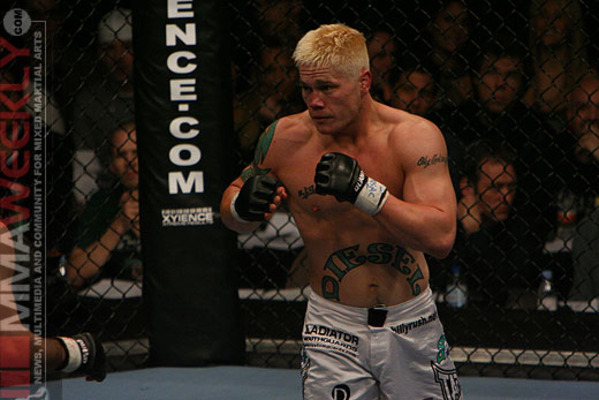 Joe Riggs is ineligible for regional rankings due to inactivity.
Fighters must have at least one completed MMA bout in the past two years to be ranked.

MMA veteran Joe “Diesel” Riggs has trimmed down to 170 lbs. in recent years, where the majority of his best performances have occurred. That fact alone is stunning, as Riggs was at one time a 300 lb. hardcore bodybuilder, and had competed in MMA as high up as heavyweight. Riggs made his UFC debut in 2004, defeating Joe Doerksen by submission (strikes), and continued to defeat top names in the organization—including Chris Lytle and Nick Diaz—during the most successful run of his career. Following his UFC career, Riggs entered Strikeforce as a middleweight, defeating Luke Stewart and Phil Baroni to reemerge as a viable contender in that promotion.

Riggs well known for his exploits outside of the cage, as he was famously involved in a physical altercation with Nick Diaz in the hospital following his fight with him at UFC 57. The police were force to intervene as the battle raged among the two fighters in hospital gowns.

A renowned worldbeater in the gym, Riggs has never lived down the label that he has failed to perform up to his potential in his major live, televised fights. Losses to Diego Sanchez and Matt Hughes, among others, were disappointments at critical moments when a win could have vaulted him to the next level.

On November 2nd, 2013 Riggs became the winner of Bellator's Fight Master MMA reality television series by winning a decision over Mike Bronzoulis. Riggs had selected Greg Jackson as his coach for the show, and was the #1 seed in both the elimination round and the quarterfinals, moving to the #2 seed in the semi-finals.

Episode 3 Riggs def. Rob Mills by Submission in Round 1