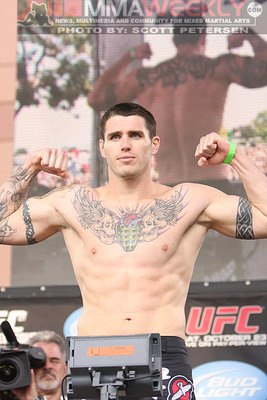 Fighting for a major organization has made Chris Camozzi ineligible for regional rankings.

Chris Camozzi is an American mixed martial artist fighting out Factory X Muay Thai. He is currently signed as a middleweight with the UFC and holds a 8-7 record within the promotion. Camozzi is not good or bad in any area, although his crisp striking is his strong suit. Camozzi was part of the 11th season of The Ultimate Fighter winning his fight against Victor O'Donnell to get into the house. However due to a broken jaw that he received during the fight Camozzi would have to leave the show, he was replaced with Seth Baczynski.

Camozzi was 2-1 to start his UFC run, winning his first two fights over Dongi Yang and James Hammortree before a submission loss to Kyle Noke. He won a split decision win over Joey Villasenor in his next fight. However, in his UFC return he lost to Tristar product Francis Carmont after being outmuscled for the majority of the bout. Camozzi has rebounded from the loss with four consecutive victories over Dustin Jacoby, Nick Catone, Luiz Cane, and Nick Ring. He looked to keep the streak alive at UFC on FX 8 when he faced off against Jacare Souza but would end up getting submitted in the first round by the former Strikeforce champ.

Camozzi's fortune in the octagon has not gotten better since his lost to Souza. Camozzi has lost four in a row after his fight with Souza. Lorenz Larkin, Bruno Santos, and Rafael Natal, at UFC FN 30, UFC 175 and UFC FN 50, respectively. All fights going to the judges.

This cold streak brings Camozzi's professional record to 19 - 9 and a record of 6 - 6 in the UFC.

After losing four consecutive fights with the UFC, Camozzi was released from the promotion for the second time. He later signed with Prize FC, a promotion based out of his home state of Colorado.

Being a UFC veteran and a well known name in North American MMA, Camozzi was immediately given a shot at the Middleweight Title, against Jeremy Kimball. Camozzi won the fight via Rear-Naked Choke at 1:33 in Round 1.

Camozzi's first title defense was at Prize FC 8, against fellow Coloradoan Wes Swofford. Camozzi came out more agressive than he normally has. The two exchanged light blows with no one doing any notable damage to one another. With 3:40 left in Round 1, Camozzi threw a low leg kick that connected with Swofford's left inner shin. Immediately the sound made it clear that the kick did more damage than could been seen, as Swofford took two steps then fell to the ground. The referee quickly saw that Swofford was injured and called an end to the bout. Giving Camozzi that victory via injury, at 1:25 in Round 1. It was later revealed that Swofford had suffered a broken tibia from the kick.

On top of competing in MMA, Camozzi also owns and operates a MMA gear/clothing line called, Performance MMA, out of Englewood, Colorado.