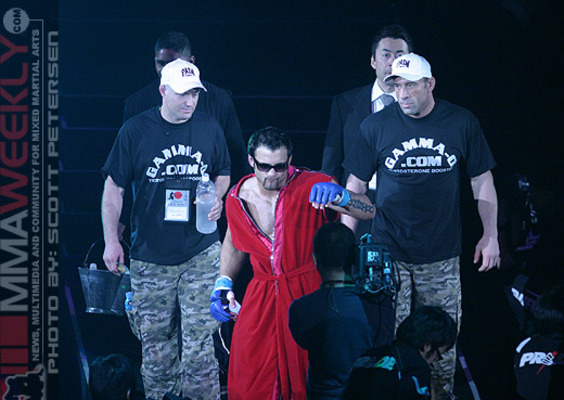 Phil Baroni is ineligible for regional rankings due to inactivity.
Fighters must have at least one completed MMA bout in the past two years to be ranked.

The always game, always entertaining “New York Badass” Phil Baroni has fought a who’s who of the world’s best fighters during a mixed martial arts career spanning more than ten years in the UFC, Strikeforce and Pride. Baroni has won his share, and lost his share as well, but his fighting heart is never in question.

At his best – which, for Baroni, means arriving to a fight lean and in shape – “The New York Badass” is one of the hardest punchers ever to compete in any weight division. His 2002 knockout over Dave Menne at UFC 39 is an all-time classic KO notable not only for its extraordinary display of power, but for the punching speed shown by the young New York native.

(A little known fact that "Big" John McCarthy reveals in his book, "Let's Get It On: The Making of MMA," is that Menne was violently ill leading up to the fight but didn't think it right to pull out. He goes on to point out that Menne never complains about the nature of the loss or volunteers the information about his illness; McCarthy knew about it because of his heavy involvement with the UFC at the time).

Even in defeat, Baroni has been known to surprise veteran opponents with his power, as in his losses to the battle-hardened Evan Tanner, who was badly rocked by Baroni and who proclaimed after victory, “that guy hits hard!” Baroni’s best fighting form may have come during his two years in Pride FC from 2005-2006, when Baroni went 4-2 over the course of six fights, finishing all four wins inside the distance. Baroni knocked out Ikuhisa Minowa, Ryo Chonan and Yuki Kondo during that time, and finished Yosuke Nishijima with a rare submission victory, via Kimura.

Baroni’s strengths lie in his standup striking, for which he retains knockout power even when he is tired in the latter stages of a fight, as well as in an underappreciated wrestling game. His weaknesses lie in his sometimes suspect cardio and, to some degree, a lack of adaptation to modern day MMA training and fighting techniques. Unlikely to contend for a championship again (though one never knows), Baroni instead brings charisma, flair, fighting spirit, and a puncher’s chance to the table.

Also known as 'The Best Eva'...which is self-explanatory.

Phil Baroni is defined by the Urban Dictionary as follows:

Phil Baroni is arguably the greatest showman in the history of human fighting. He is the New York Bad Ass and he represents the coolest faction in the fight scene, Hammer House (never bet the house against the Hammer House!). He wears a beautiful robe and sunglasses worth more than the average man's life. He enjoys dancing to the ring and yelling at referees for touching his hair. He has big muscles and likes to show them off much to the asian/island women's delight while wearing nothing but daisy dukes. The Baroni style of fighting consists of jiving around for a few seconds then promptly storming in and punching the opponent as hard as possible in the head until they are rendered unconscious; it is time tested and proven highly effective. There is also video evidence of Baroni mocking his opponents screams of pain during post-match interviews. Phil Baroni has a great amateur wrestling background but he refuses to use it because he is a showman and knows what the people want to see. Punching. And lots of it. Phil Baroni has claimed on more than one occasion that he is the greatest fighter in his weight class, which is a no brainer, but Baroni is too humble to say what most everyone else believes, that he is the greatest fighter in any weight class...ever. He also was a male stripper at a go-go bar.

Watch this video interview with Phil Baroni as he contemplated retirement with Fight! Magazine.