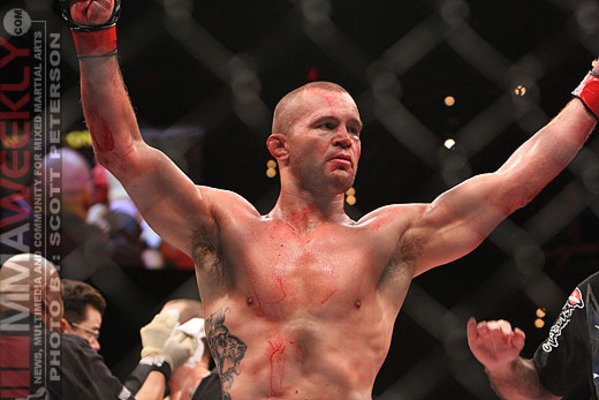 #96
Greatest MMA Striker of All Time

Chris Lytle is ineligible for regional rankings due to inactivity.
Fighters must have at least one completed MMA bout in the past two years to be ranked.

A professional boxer and a black belt in Brazilian Jiu-Jitsu, Chris Lytle is a true student of the sport.  Lytle has been competing on a professional level since his debut in 1999, merely one year after he begun training.  Throughout his career, Lytle has competed for many of the top MMA promotions in the world (including Pancrase, the WEC, and the UFC) and holds notable wins over Kazuo Misaki, Pete Spratt, Matt Brown and Paul Taylor.

Although he is a well-rounded fighter with finishing ability both on the ground and on his feet, Lytle consistently elects to stand and bang with his opponents, winging punches in tests of bravado that incite the crowd. As a result, he has been called the most consistently exciting fighter in the world by many fans and most of his peers, shown by his earning Fight Night honors in the majority of his UFC appearances.

Lytle’s boxing skills are superior to those of the average mixed martial arts fighter, but his true (and often hidden) skill lies in Jiu-Jitsu, as he has finished more than half of his pro wins by submission. His first round tapout of Brian Foster at UFC 110 was among the slickest of the year. One of the toughest men in the sport, Lytle has never been knocked out (aside from stoppages due to cuts) or submitted in over 60 professional fights in boxing and MMA.

Chris Lytle retired from MMA competition after his bout with Dan Hardy at UFC Live 5, citing his family.  It was one of the best ways to retire after receiving Submission of the Night as well as Fight of the Night for his scrap with Hardy. Lytle ending up running for Indiana State Senate in 2012 but would lose.

Episode 3 Quater Finals Lytle def. Pete Spratt by Guillotine Choke at 2:06 of Round 1