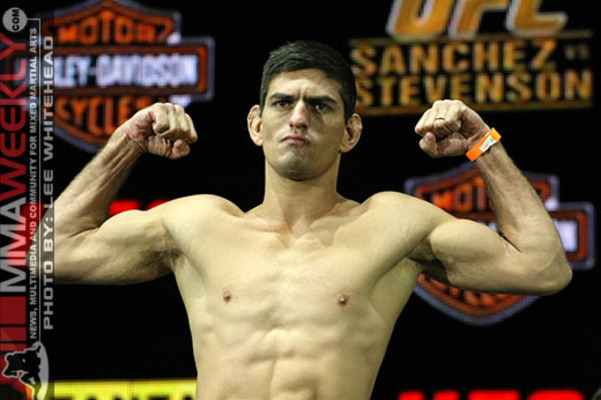 Paulo Thiago is ineligible for regional rankings due to inactivity.
Fighters must have at least one completed MMA bout in the past two years to be ranked.

Paulo Thiago is a Brazilian mixed martial artist who holds a Black Belt in Brazilian Jiu-Jitsu as well as a Black Belt in Judo. Prior to—and throughout—his professional mixed martial arts career, Thiago has served as a senior member of BOPE, an elite Special Forces police unit operating in some of the most dangerous, drug-infested slums in Brazil. Known predominantly for his skills on the ground as well as his training in BOPE, Thiago has surprised many of his top-ranked opponents with his punching power.

Thiago made his professional fighting debut in 2005, winning his first six fights by submission before moving to Brazil’s Jungle Fight promotion, where he went on to win four more fights before being signed by the UFC in 2009. Upon his UFC debut, Thiago shocked the world, pulling off one of the biggest upsets of the last decade when he knocked out top welterweight contender Josh Koscheck in the first round. Although Thiago lost his next bout—a Unanimous Decision to Jon Fitch—he rebounded with a victory over Jacob Volkmann before choking out another AKA-trained welterweight in Mike Swick with a second-round Brabo Choke at UFC 109. Though Thiago’s win over Swick would also go down as an upset on the books, fewer people were sleeping on the talented Brazilian by this point, and many called the bout to go his way. Although two consecutive losses to Martin Kampmann and Diego Sanchez derailed his momentum, he rebounded with a one sided win over David Mitchell. Thiago then received the first stoppage loss of his carer after getting knocked out in just 42 seconds by Siyar Bahadurzada.

Thiago would drop a decision to Dong Hyun Kim before getting back in the win column with a victory over Michel Dos Prazeres. His next fight was supposed to be against the Ultimate Fighter winner Kelvin Gastellum at UFC Fight Night 27 in Inidianapolis on August 28th, but on July 22nd it was reported that Thiago was forced out of the bout due to knee injury. His next matchup would instead be against UFC newcomer Brandon Thatch at UFC Fight Night 32 in Brazil. Thatch would land a brutal knee to the body that dropped Thiago and forced him to tap out.