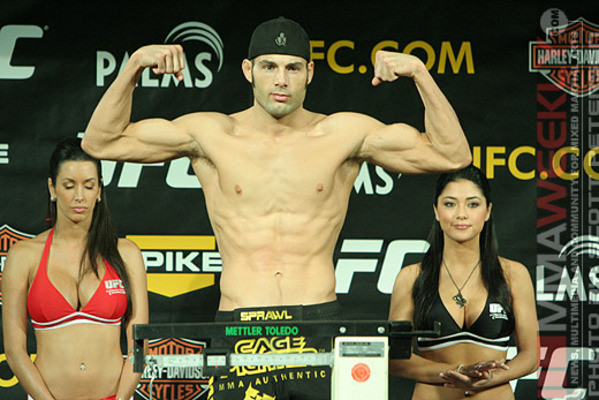 Mike Swick is ineligible for regional rankings due to inactivity.
Fighters must have at least one completed MMA bout in the past two years to be ranked.

American Kickboxing Academy fighter Mike “Quick” Swick is one of the UFC’s top echelon welterweight fighters. He began his MMA career an impressive 5-0 in local shows before dropping his first contest to future fellow TUF cast member Chris Leben in an unsuccessful bid at the WEC Middleweight Championship. Nevertheless, the promising young prospect was invited to join the inaugural season of The Ultimate Fighter, where alongside future stars like Forest Griffin, Kenny Florian and Josh Koscheck, Swick’s profile was raised substantially by the success of the series.

Swick entered the UFC on a tear, winning his first four UFC bouts at 185 lbs. in the first round at times of 0:20, 0:22, 2:09 and 2:19. Swick mixed finishes with his patented Guillotine Choke, which he humorously dubbed the “Swickotine,” with crisp KOs from punches, and seemed to be on the short list to challenge for the Middleweight Championship. A loss to Yushin Okami in which Swick was physically overpowered derailed not only that title shot, but his future in the middleweight division, as Swick elected to drop to 170 in response. Tilts against increasingly tough opponents there led to a number of losses, including the first back-to-back losses of his career against welterweights Dan Hardy and Paulo Thiago.

Since returning to the octagon after an extended injury layoff, Swick has gone 1-1 with a KO win over DaMarques Johnson and a KO loss to Matt Brown.

Unlike many believe Swick is not yet retired, as he told a member on mixedmartialarts.com; "I am not retired yet! Just been working on my health and building AKA Thailand." His health being his motorcycle accident he suffered back in January of 2014. Swick dedicated all of 2013 to establishing the newest addition to the American Kickboxing Academy empire - AKA Thailand. Or Swick's "dream gym" as he likes to call it. AKA Thailand features the largest indoor BJJ/MMA training mat in Thailand and is one of the largest gyms of its kind in the world.

With a return to the UFC questionable, Swick has remained firm that there is no timeline for his next bout in the UFC and is happy focusing his attention on fight camps for others at AKA Thailand.

Combining excellent height for a welterweight with crisp punching and a dangerous Guillotine, Swick remains one of the toughest tests in the division.

Episode 12 Stephan Bonnar def. Swick by Submission (triangle armbar) at 4:58 of Round 1

The Ultimate Fighter 1 Finale Swick def. Alex Schoenauer by KO (strikes) at 0:20 of Round 1

Watch this episode of Real Quick with Mike Swick as the UFC fighter travels to the UFC Fan Expo in 2010.

Watch this video blog with UFC fighter Mike Swick as he spends time with UFC fans.

Watch this video blog with UFC fighter Mike Swick as he spends time with UFC fans.