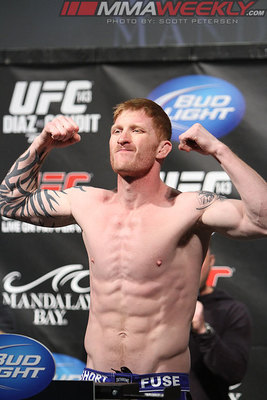 Fighting for a major organization has made Ed Herman ineligible for regional rankings.

Fighting out of Team Quest in Portland, Oregon, Ed “Short Fuse” Herman was once a top contender in the Ultimate Fighting Championship's middleweight division.  He started his career an undefeated 10-0 before running into Japanese veteran Kazuo "Grabaka Hitman" Misaki, who dealt him a loss in 2004 at a Pancrase event.  Herman then put a pair of wins together over respected fighters Nick "The Goat" Thompson and Dave "The Warrior" Menne before joining the middleweight tournament on the third season of the Spike TV reality show The Ultimate Fighter.  In keeping with his nickname, “Short Fuse,” Herman was easily peeved during The Ultimate Fighter 3 tournament and didn’t get along with the majority of the other fighters in the house.  Herman is well-rounded and extremely tough.  While Herman did not win the tournament, he impressed UFC President Dana White enough during his finals bout with Kendall "Da Spyder" Grove that he was awarded a UFC contract and he has competed in the UFC ever since.  He is a black belt in Brazillian Jiu Jitsu.

Some of Herman’s notable UFC victories have come against David "The Crow" Loiseau, Joe "El Dirte" Doerksen, and Scott "Hands of Steel" Smith.  Herman prefers to stand and strike with opponents since he has never been knocked out in a professional fight but he is probably more skilled on the ground, where the majority of his wins have come by way of submission.  Herman would injure his knee badly in his fight with Aaron "A-Train" Simpson and he was away from the octagon for almost two years.  He would make a triumphant return finishing three straight fights with his wins over Tim Credeur, Kyle "KO" Noke and Clifford "Big Cat" Starks.  He would lose a decision to Jake Shields in his next fight however it was later turned to a No Contest as Shields tested positive for a banned substance.

Herman became the first and only UFC to Strikeforce crossover fighter when to competed against Ronaldo "Jacare" Souza at Strikeforce's last event in January, 2013.  Herman was quickly submitted by the submission specialist, Souza.  Herman next faced Trevor "Hot Sauce" Smith at UFC on FOX 8 where he defeated Smith via split decision.  Herman then faced Thales Leites
at UFC 167: St. Pierre vs. Hendricks  where he lost a unanimous decision.

"Short Fuse" got back to his winning ways and defeated Rafael Natal via Unanimous Decision in his next appearance in the octagon. He is now scheduled to face Derek Brunson on December 13th,2014 on the Preliminary card of UFC ON FOX 13: Dos Santos vs Miocic.

Episode 8 Herman def. Danny Abbadi by Submission (Armbar) at 4:14 of Round 1