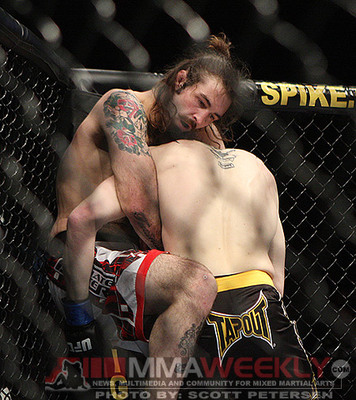 Cody McKenzie is ineligible for regional rankings due to inactivity.
Fighters must have at least one completed MMA bout in the past two years to be ranked.

Cody McKenzie was born in Alaska and took his first MMA fight when he was a sophomore in high school and after that knew MMA was what he wanted to do. McKenzie would win his first fight in 2007 by TKO and pick up his second win by Triangle Choke the same year. He would then go on a tear and win his next nine fights all by guillotine choke. He actually does the choke a little different than most people do and started calling it "The McKenzietine"

Episode 1 McKenzie def. Amir Khillah by Guillotine Choke at 2:15 of Round 1

Episode 6 McKenzie def. Marc Stevens by Guillotine Choke at 0:17 of Round 1

He would still get a chance at the UFC but would drop his first two fights to Vagner "Ciara" Rocha and Yves "Thugjitsu Master" Edwards. He would notch another guillotine win over Marcus "The Prospect" LeVesseur before dropping his next fight to Chad "Money" Mendes. McKenzie would then pick up a much needed win with his first decision win of his career over Leonard "Bad Boy" Garcia at UFC 159.  McKenzie then faced Sam "Hands Of Stone" Stout in a lightweight bout on December 14, 2013 at UFC on Fox 9.  He lost the fight via unanimous decision and was subsequently released from the promotion on March 26th, 2014.

McKenzie's next fight is at the Battle for the Border 3 event on April 12th, 2014 and his opponent will be Mark Dobie at a catchweight of 180 lbs.  McKenzie defeated Dobie via submission. However he would lose his next two fights.

On 18 December, 2014, McKenzie took to Twitter to announce his retirement. The tweet read "I'm done fighting I would call it retiring but I never made no money so yea I quit."