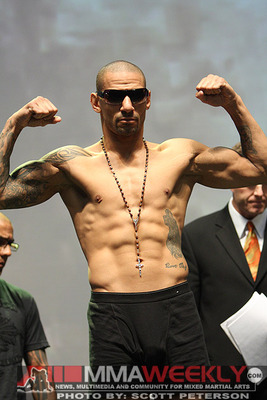 Jay Hieron is ineligible for regional rankings due to inactivity.
Fighters must have at least one completed MMA bout in the past two years to be ranked.

In a sport where one loss can forever change the outlook of a fighter’s career, Jay Hieron was once considered the future of the 170-pound weight class before future champ Georges St. Pierre handed him his first professional loss in 2004. Since that time, Hieron has clawed his way back to prominence while competing for every top promotion outside of the UFC, defeating the likes of Jake Ellenberger, Jason High, Jesse Taylor, and Joe Riggs. He is undoubtedly one of the most underrated and underappreciated welterweights in the world.

Building off of a solid wrestling base honed during his time as a Junior College National Champion at Nassau Community College in New York, Hieron has evolved under the tutelage of trainers at Xtreme Couture into a well-rounded mixed martial artist equally capable on his feet and on the ground. The loss to St. Pierre marks the only time Hieron has been finished in a professional fight.

Hieron was on a 10 fight win streak including wins in the IFL, Strikeforce and Bellator earning him a title shot against Bellator welter-weight champion Ben Askren. Hieron would lose a very close Split Decision to the champ. He would fight once more for Legacy FC winning by submission in the 2nd round. Hieron would get his shot at the UFC again signing a rematch with Jake Ellenberger who he beat in the IFL by decision earlier in his career. Originally scheduled for the infamous UFC 151 fight card the match-up was then moved to UFC on FX 5. Hieron would lose the rematch by Unanimous Decision. He would also drop his next bout to Tyron Woodley in the first round by TKO. It was later announced that Hieron would be cut from the promotion.

On March 7, 2014, Hieron announced his retirement from active competition