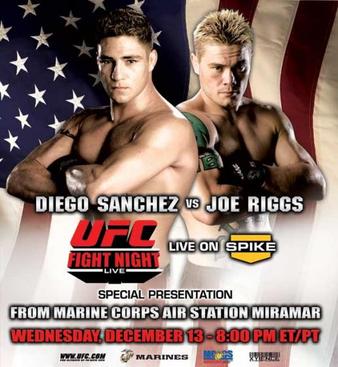 The seventh entry in the popular Spike TV-televised Ultimate Fight Night series took place at the Marine Corps Air Station Miramar near San Diego, California, and featured a main event pitting TUF 1 champion Diego Sanchez against veteran welterweight Joe Riggs in what was billed as Sanchez’s biggest test to date inside the Octagon. The raucus Marine Corps crowd lent a powerful energy to the event.

In the main event, Sanchez established himself as a viable contender to the welterweight crown by knocking Riggs down with a punch before knocking him out cold with a knee at the 1:45 mark of the first round.