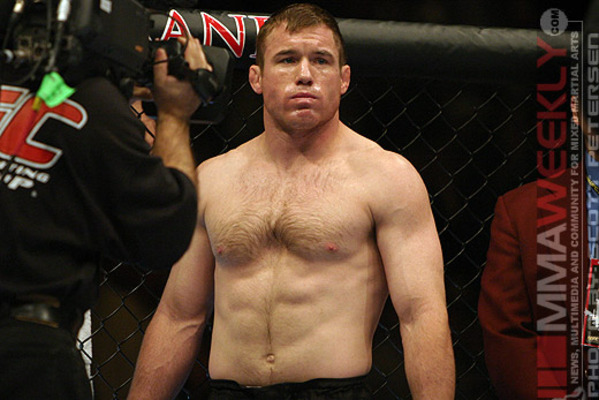 Matt Hughes is ineligible for regional rankings due to inactivity.
Fighters must have at least one completed MMA bout in the past two years to be ranked.

Matt Hughes is simply one of the most dominant figures in the history of mixed martial arts. Beginning his professional fighting career in 1998, the Miletich Fighting Systems-trained Hughes quickly established himself as one of the most dangerous fighters in the world, running his record to an unheard-of 35-3. Hughes went on to win and subsequently defend the UFC Welterweight Championship five times, before losing it in an upset to BJ Penn in 2004. Hughes holds career wins over a who’s who of the mixed martial arts world, including Dave Menne, Akihiro Gono, Carlos Newton (twice), Hayato Sakurai, Sean Sherk, Frank Trigg (twice), Georges St. Pierre, BJ Penn, Royce Gracie, Renzo Gracie and Matt Serra.

Utilizing freakish strength -- what midwesterners refer to as "farm strength" -- a suffocating top game, and an underrated submission skillset, Hughes has defeated the majority of his professional opponents by way of submission or TKO from the ground. While many believe his time at the top of the division has come to an end at the hands of next-generation fighters Georges St. Pierre, Thiago Alves, and Josh Koscheck, Hughes remains one of the most respected all-time greats in the sport’s history and popularized a hybrid wrestling/grappling style that many would emulate.

A plain-spoken, understated individual, Hughes is proud to live on a working farm, and makes his Octagon entrances to his trademark song, Hank Williams Jr.'s “A Country Boy Can Survive.” He possesses a deep competitive fire that fueled him to epic come-from-behind wins against Newton, Trigg and St. Pierre. Hughes was inducted into the UFC Hall of Fame in May of 2010. Hughes also released an autobiography in 2008 titled "Made In America" which made the New York Times bestseller list.

Following back to back TKO losses to BJ Penn and Josh Koscheck it appears that Matt has decided to hang up the gloves. It was announced at the UFX on Fox 6 press conference that Hughes was officially retiring from MMA and accepting a position as Vice President of Athlete Development and Government Relations for the UFC. At the time of his retirement Hughes left the UFC with the most wins in the company at 18 as well as holding the welterweight title 2 separate times.

Matt Hughes stars in this spot for Xyience entitled "Country Breakfast" that is well-remembered by hard-core MMA fans.