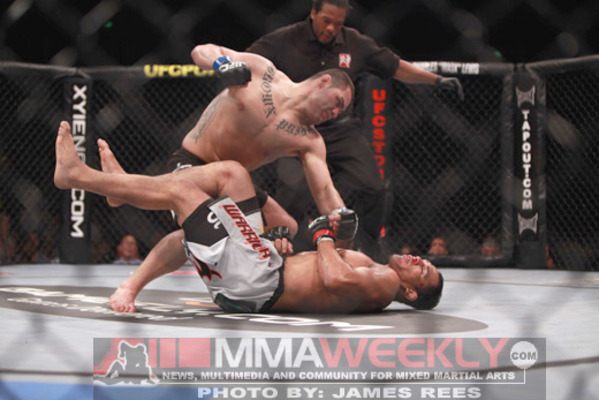 Cain Velasquez is ineligible for regional rankings due to inactivity.
Fighters must have at least one completed MMA bout in the past two years to be ranked.

Heavyweight juggernaut Cain Velasquez burst onto the MMA scene in 2006, winning his first two professional fights by TKO (punches) in the first round before he was, reportedly, unable to find another opponent willing to fight him. This prompted a premature move to the UFC, the premier mixed martial arts organization in the world, in 2008, before Velasquez had fully developed.

With some unsure of Velasquez’s chances in the reinvigorated heavyweight division, the Mexican-American heavyweight quickly silenced the skeptics with a series of crushing wins over Brad Morris, Jake O’Brien, Denis Stojnic, Cheick Kongo, Ben Rothwell, and MMA legend and former UFC and Pride Heavyweight Champion Antonio Rodrigo Nogueira, finishing all of them save for Kongo with strikes. His smothering attacking style and eerie calm in the Octagon had UFC announcer Joe Rogan anointing him one of the “spookiest,” and best, young prospects in the organization. Meanwhile, some of those who trained with Velazquez behind closed doors were already calling him the best heavyweight in the world.

Velasquez became the UFC heavyweight champion at UFC 121 when he convincingly tore through the mammoth title-holder Brock Lesnar. Cain's boxing technique and swiftness in escaping difficult positions were instrumental in his ability to weather a blitzing attack from Lesnar and then seize control of the fight.

An All-American Division I collegiate wrestler from Arizona State University, Velasquez often utilizes his wrestling for positional control and advancement in the cage, moving his opponents around and tiring them out in order to open them up to a vicious striking assault on the ground. In recent performances, Velasquez has also demonstrated crisp stand-up skills and seamless transitions, a result of his training with American Kickboxing Academy in San Jose, California. Cain is also a practitioner of Brazilian Jiu-Jitsu earning the rank of Black Belt under Leandro Vieira however we are yet to see Cain utilise his submission skills inside the octagon.

Cain would lose the heavyweight championship in his first title defense to Junior Dos Santos. The fight was stopped at 1:04 in the first round via TKO with Junior Dos Santos walking away with the belt. Cain would return to the ring with a vengeance at UFC 146 versus Antonio "Bigfoot" Silva. Velasquez would completely dominate his opponent on his way to a 1st round TKO that saw a lot of blood shed from Bigfoot. This would lead to the much anticipated rematch against JDS at UFC 155.

In his rematch with dos Santos, Velasquez was able to silence many critics and showed what he was truly capable of. He was able to dominate the champion in every aspect of the fight from striking to grappling. After battering him in the first round on the feet, Cain was able to take Junior down at will for the remainder of the fight. This was even more remarkable since many believed that Junior had the best take down defense in the Heavyweight division. Even though his opponent's face was badly swollen after the fight, it looked as though Velasquez had taken very minimal damage.

Cain would then fight Antonio "Bigfoot" Silva in a rematch however this time the belt was on the line at UFC 160. Velasquez would make even quicker work of Silva this time around finishing him in the first again to successfully defend his Heavyweight title for the first time.

Velasquez again met Dos Santos in the Octagon when they headlined UFC 166 to complete their trilogy and again fight for the Heavyweight crown. In a fight that had many parallels to their second meeting, Velasquez was able to this time stop JDS in the fifth round via TKO in the fifth round to retain his title. Their epic trilogy has been called one of the best in the history of MMA and proved that both men are two of the greatest heavyweights to ever compete. After the fight, Velasquez was thought to have a shoulder injury, but it was believed that surgery was unnecessary. When the condition did not improve after a couple months, surgery was preformed to repair a torn labrum. He is expected to be sidelined until late 2014.