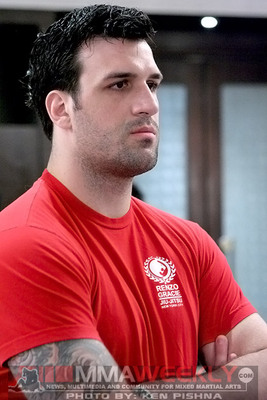 Rolles Gracie is ineligible for regional rankings due to inactivity.
Fighters must have at least one completed MMA bout in the past two years to be ranked.

Born July 14, 1978 in Rio de Janerio, Brazil Rolles is the son of the late Rolls Gracie. Rolles father died in 1981 in an accident while hang gliding.

Gracie began his MMA career in 2007 for the IFL's New York Pitbulls (coached by his cousin Renzo Gracie) where he defeated Sam Holloway in the first round with a RNC. Rolles then won his next two fights in Art of War promotion in China both with first round submissions. At UFC 109 Rolles made his much anticipated UFC debut against the debuting Joey Beltran. Beltran would go on to upset the heavily favored Gracie by second round TKO. Rolles was released by the UFC after the fight and has since ran his record to 7-1 with all seven wins coming by way of submission. Rolles is currently on the HW roster of ONE FC and WSOF.

Rolles is currently the head instructor of Renzo Gracie's school in Holmdel, New Jersey, where he lives with his wife and three children. Rolles' younger brothers Igor and Gregor are both currently active in MMA.