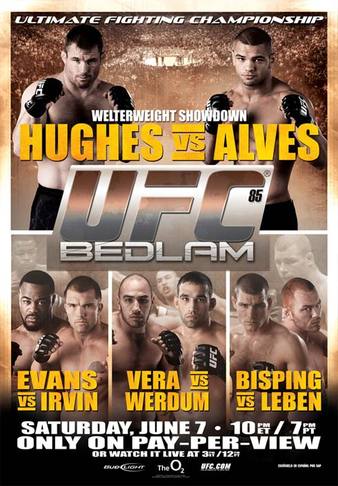 After the dismal Pay Per View performance of UFC 80 in January, it seemed that no card could do worse in 2008. Enter UFC 85, which, after one of the worst strings of injuries in promotional history had altered its main event more times than ever before, wound up with a non-title welterweight fight between Matt Hughes and Thiago Alves that drew 215,000 buys.

In the main event, Alves demolished Hughes in two rounds, finishing him with a flying knee for the knockout. Alves came into the fight four pounds overweight. The main event was originally supposed to feature Chuck Liddell fighting Mauricio Rua, but Rua was forced off the card due to injury, as was Liddell.