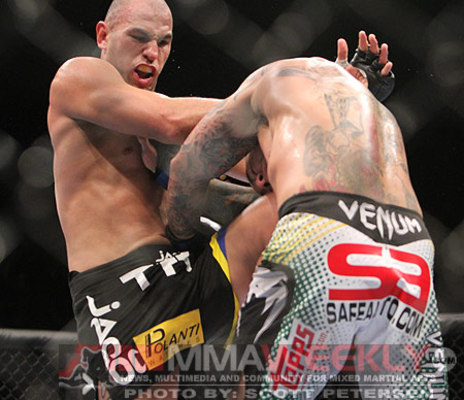 Fighting for a major organization has made Brandon Vera ineligible for regional rankings.

When he first entered the UFC in 2005 as a heavyweight, Brandon “The Truth” Vera extended his undefeated record to 8-0 with notable stoppage victories over Mike Whitehead, Justin Eilers, Assuerio Silva, and former UFC Heavyweight Champion Frank Mir, prompting many to label him the next big thing in the sport of mixed martial arts. Unfortunately for Vera and his fans, a contract dispute with the UFC left him sidelined for 11 months, and the Vera of old has yet to make his triumphant return to the cage. After losing back-to-back fights at heavyweight to Tim Sylvia and Fabricio Werdum, Vera moved down to light heavyweight, where he has met with mixed results, defeating Krzystof Soszynski by Unanimous Decision and losing to Randy Couture and Jon Jones as well.

While he possesses an underrated Brazilian Jiu-Jitsu game, Vera has only finished one of his professional fights by submission. The “truth” is that the true strength of his game lies in his ability to inflict damage with strikes at a distance, as he seems to have trouble with opponents who stay close to him or clinch him against the cage. Vera is nevertheless a danger to any fighter he faces, and a veteran of the sport at a younger age than most.

After losing to Jon Jones, he would take on Thiago Silva in another fight he would lose that would also end up with him being cut from the promotion. However the match was changed to a No Contest when it was revealed that Silva had failed a drug test. Vera was given another chance and came back to win a Unanimous Decision over Eliot Marshall at UFC 137. Vera was then matched up as a big underdog against Mauricio Rua. Vera surprised alot of people because he showed up to fight that night and stood in there and traded with Shogun making a competitive fight out of it before finally losing in the 4th round by TKO.

After his fight with Shogun, Vera would return to the Octagon at UFC 164.  This time, however, Vera would be competing in the Heavyweight division for the first time since his loss to Fabricio Werdum at UFC 85; as he would be competing against Ben Rothwell.  Coming into the bout as a slight underdog, Vera was able to stay in the fight with Rothwell until the third round; in which, Rothwell unloaded a flurry of strikes and would get the KO victory over Vera.   After this bout,  Vera would be released from the UFC on June 17, 2014.  This would mark the end of Vera's eight year run with the UFC.

Following his release from the UFC, Vera would get picked up by the Singapore-based fighting promotion ONE FC.   Vera would make a strong first impression in his ONE FC debut, as he would score a 1st Round KO victory over Igor Subora at ONE FC 23: Warrior's Way.  As of now, Vera is slated to fight Paul Cheng to become the inagural ONE Heavyweight Championship at ONE Championship 35 on December 11th.  Vera was originally slated to fight undefeated MMA fighter Chi Lewis Parry, but Parry was pulled from the bout after he failed to submit his medical records and drug test results to ONE Championship officials before the December 11th bout.