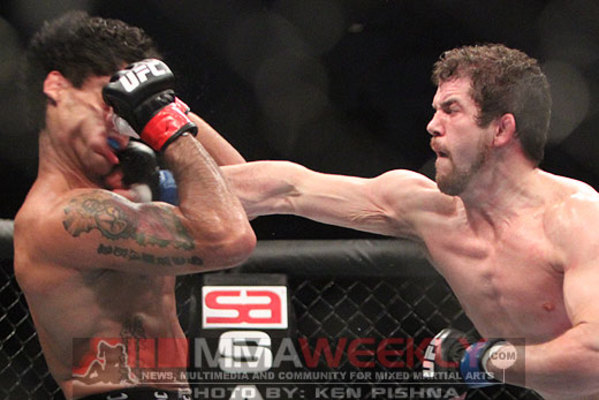 Shane Roller is ineligible for regional rankings due to inactivity.
Fighters must have at least one completed MMA bout in the past two years to be ranked.

A lightweight who trains at Team Takedown with the likes of welterweight contender Johny Hendricks, Shane Roller is a former D1 wrestler who also possesses a submission game, winning six of his 11 victories by some form of choke. Roller signed with the WEC after compiling a 3-1 record in regional promotions, and would defeat his first two opponents with first round guillotine chokes. He would then take on eventual WEC champ and current UFC lightweight kingpin Benson Henderson, where he would lose for the first time in the WEC, by first round TKO. He would then win three straight, including submission wins over Danny Castillo and Anthony Njokuani. Roller would then take part in a fight to determine the next title challenger at 155, facing off with Anthony Pettis. After a back and forth fight, Roller would tire, and Pettis would finish in the second round with a triangle choke. After choking out Jamie Varner, Roller would enter the UFC on a high note.

Roller shocked many in his UFC debut against Thiago Tavares. The fight would make the Versus broadcast, despite the fact that the fight was a preliminary feature. Throughout the fight, Tavares seemed to be picking the former Oklahoma State wrestler apart on the feet, and stuffing all of his takedowns. Color commentator Joe Rogan was even commenting that Roller's striking needed work, and looked awkward. Out of nowhere, Roller landed a big straight right, flooring Tavares, and knocking the Brazilian unconscious. It was the first time Roller knocked out an opponent under the Zuffa banner.

Roller would not be as lucky in his next three fights, getting brutally knocked out by striking specialist Melvin Guillard, losing by submission to up and comer TJ Grant, and losing a decision to TUF 12 finalist Michael Johnson. However, Roller would bounce back against John Alessio, winning a decision, thus ending his three fight skid. He would however lose in his next match by first round submission to Jacob Volkmann. Following the loss Roller announced via twitter that he would be hanging up the gloves for good.