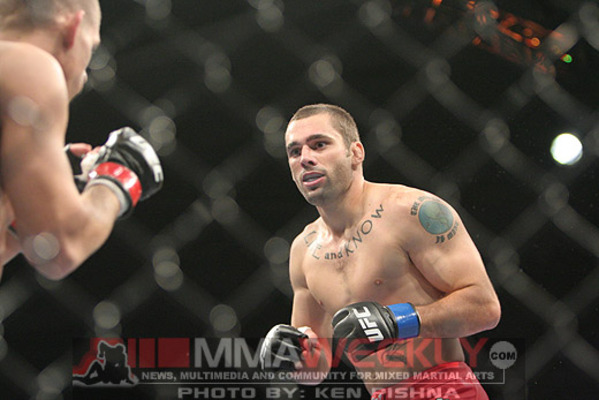 Kyle Bradley is ineligible for regional rankings due to inactivity.
Fighters must have at least one completed MMA bout in the past two years to be ranked.

After establishing himself as one of the most gifted prospects on the southern United States MMA scene, finishing the majority of his fights by knockout, Kyle Bradley entered the UFC in 2008 and quickly lost two fights in a row after being fed to the wolves in the form of experienced and aggressive veterans Chris Lytle and Joe Lauzon. Although he knocked out Phillipe Nover in 2009, Bradley was cut from the UFC in 2010 following a Decision loss to Brazilian grappling ace Rafael dos Anjos.

Bradley’s greatest asset, his accurate, pinpoint boxing, could also be considered his biggest weakness, as he has shown an inability to adapt to precarious positions while in the cage against seasoned veterans.

Bradley was a playable character in "UFC Undisputed 2009" available on Xbox and Ps3.

He also had a cameo appearance as the main fighter antagonist of the 2012 film "Philly Kid" where he was the champion Titan "The Bayou Bully" Powell.