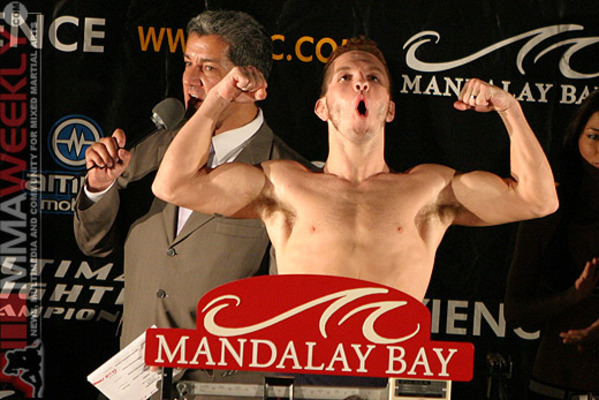 Spencer Fisher is ineligible for regional rankings due to inactivity.
Fighters must have at least one completed MMA bout in the past two years to be ranked.

Originally fighting out of the famed H.I.T. Squad in Iowa, Spencer Fisher has long been one of the most respected fighters in the UFC lightweight division. He started his UFC career off with a bang in 2005 -- in his Octagon debut he submitted future welterweight contender Thiago Alves with a Triangle Choke in the second round. Fisher holds wins over some of the sport’s best lightweights, including Josh Neer, Matt Wiman, Dan Lauzon, Sam Stout, Jeremy Stephens and Caol Uno, and he has been involved in several Fight of the Night performances in the Octagon.

Fisher’s most notable tilts may be his pair of fights with Canadian striker Sam Stout. When the pair first met in 2006, Stout emerged with a Split Decision victory in one of the best fights of the year. It was Fisher who would shine in the rematch one year later, defeating Stout by Unanimous Decision in another Fight of the Night victory. Although he has natural ability on the ground, Fisher prefers to stand and exchange strikes with the majority of his opponents, having been overpowered by larger wrestlers during his career.

A devout fan of professional wrestling legend "The Nature Boy" Rick Flair, Fisher has been known to borrow Flair's trademark "whoop" before he fights.