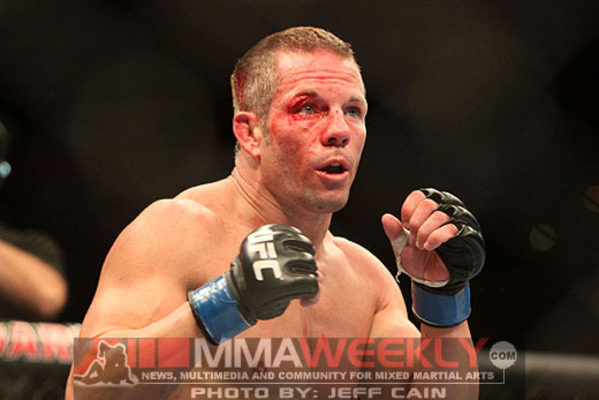 Marcus Davis is ineligible for regional rankings due to inactivity.
Fighters must have at least one completed MMA bout in the past two years to be ranked.

After compiling a professional boxing record of 17-1-2 from the age of 19, Maine’s Marcus Davis turned to mixed martial arts. He began by training with the famed, and famously tough, Miletich Fighting Systems at the beginning of his career. Davis made his professional debut in 2003, compiling a 3-2 record before losing to Melvin Guillard in his UFC debut due to a cut in the second round. Davis would rebound from the loss with five straight wins to earn his way back into the UFC, where he has since defeated notable welterweights Shonie Carter, Chris Lytle, and Jonathan Goulet.

Davis’s short reach and relatively small frame have given him some problems against longer opponents at 170 lbs., but his boxing ability and surprising skill on the ground have led him to finishes in many of his UFC appearances. A loss to Brit newcomer Dan Hardy was a major disappointment for Davis, as Hardy had clearly been effective in antagonizing Davis before the fight, and Davis entered the Octagon wanting to win so badly that his performance looked impaired as a result. Davis had also struggled with cuts for most of his career, as his earlier life in boxing had left him with tremendous scar tissue around his eyes. Recent plastic surgery has been successful in ameliorating the condition. Davis is one of the most exciting fighters in the welterweight division, having won multiple Fight of the Night awards for his efforts.

He would be cut from the UFC after losing back to back fights to Nate Diaz and Jeremy Stephens. He would continue on with his fight career fighting for MFC, Bellator and a few other smaller promotions. He is 5-2 since leaving the UFC and his next fight will be in his home state of Maine against Ryan Sanders at Fight Night MMA 12. There is a bit of rivalry in the fight as Sanders used to train at Davis's gym Team Irish, but switched to Young's MMA in 2011. To fuel the rivalry Davis was a corner man for Gil De Freitas when he fought Sanders for the NEF welterweight title.

Episode 4 Joe Stevenson def. Davis by Submission (Elbows) at 4:10 of Round 1