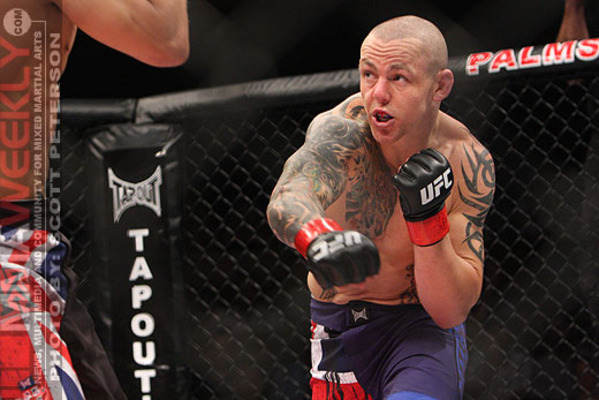 Ross Pearson is ineligible for regional rankings due to inactivity.
Fighters must have at least one completed MMA bout in the past two years to be ranked.

A former bricklayer from Sunderland, England, Ross Pearson began fighting professionally in 2004, amassing an 8-3 record prior to earning his way onto The Ultimate Fighter Season 9: U.S. vs. U.K. He holds a black belt in Tae Kwon Do and currently trains out of Team Alliance in San Diego, California. Of his fifteen wins, he has finished ten with equal numbers of submisions and T/KOs. Pearson competed on Michael Bisping’s team, winning The Ultimate Fighter in 2009 after defeating Andre Winner in the finals.

Following his win over Winner, Pearson opened eyes when he defeated experienced veteran Aaron Riley with a second-round TKO, displaying much-improved striking accuracy and versatility during the fight. Pearson followed that victory up by putting on an equally dominant performance over German power-striker Dennis Siver in 2010, winning a Unanimous Decision to emerge as a dark horse in the lightweight division.

Although his striking—and that of the British stable of fighters in the UFC as a whole—has never been questioned, Pearson has yet to be seriously tested by one of the many powerful and aggressive wrestlers in the division. At a stocky 5’8”, Pearson is not a large lightweight, so he will have to prove that he can deal with the elite grapplers division in the near future in order to compete for the title.

Pearson would alternate wins and losses in his next 6 fights after fighting Siver and would pick up wins over Spencer Fisher, Junior Assuncao and George Sotiropoulus. Pearson was the Team UK coach for The Ultimate Fighter: Smashes opposite of Sotiropoulus who was the Team Australia coach. Pearson finished him in the third round of their fight by TKO. He would then welcome Strikeforce vet Ryan Couture to the octagon in spectacular fashion, finishing him by TKO in the second round. Ross took on Melvin Guillard in the co main event of UFC Fight Night 30 in Manchester, England, but unfortunately the fight was stopped early in the first round and declared a no contest due to an illegal knee thrown to a downed Pearson. This marked the third consecutive fight that he had been either the main or co main event. These two were quickly matched up to fight again at UFC Fight Night 37 as the co main event, but a knee injury forced Pearson off of the card.

He would lose his next fight by a controversial Split Decision to Diego Sanchez. Many people felt that it was a robbery as Pearson landed more punches was more accurate and scored the fights only takedown. He would bounce back with a second round TKO over Gray Maynard before dropping his next fight to Al Iaquinta by TKO. He would get back on the winning track when he faced Sam Stout at UFC 185. He would finish Stout in the second round by TKO and earn himself a performance of the night bonus as well.

Episode 7 Pearson def. Richie Witson by Armbar at 3:40 of Round 1