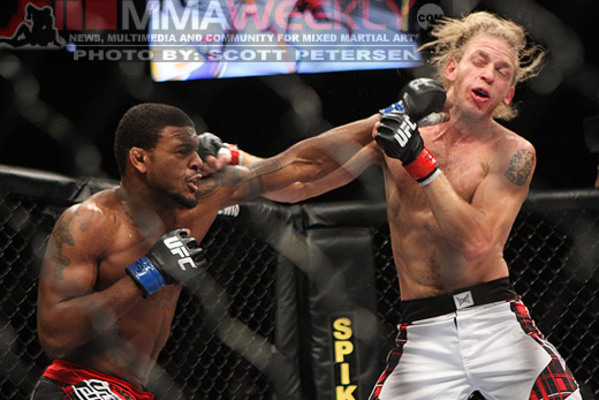 Fighting for a major organization has made Michael Johnson ineligible for regional rankings.

Michael Johnson was a football player and wrestler in college and began his mma training in 2007. He would amass a 8-4 record before signing up for the Ultimate Fighter Team GSP vs. Team Koscheck. Before being cast on the twelfth season, he had tried out twice previously and told the producers that he was tired of chasing them across the country, but would continue to if he was not cast.  On his way to that record Johnson would win the Lightweight title for Midwest Fight League as well as XCF Lightweight Title. He has previously trained at Jackson's MMA but currently trains with the Blackzillians.

After his loss to Brookins, Johnson went 1-1 before an impressive three fight win streak, including a "Knockout of the Night" performance against Danny Castillo. After losing two straight to Reza Madadi and Myles Jury, Johnson got the biggest win of his career with a dominating performance over Joe Lauzon. He was able to pick up an impressive second round knockout when he faced Gleison Tibau at UFC 168. Michael stepped in on six weeks notice to take on Melvin Guillard at UFC Fight Night 37. He was frustrated for the fight as Guillard seemed to circle out the whole fight but Johnson just kept landing and was awarded the unanimous decision. Johnson was critical of Guillard's performance and thought with all the smack talk before the fight it was going to be a scrap.

Episode 3 Johnson def. Aaron Wilkinson by Rear Naked Choke at 0:37 of Round 3