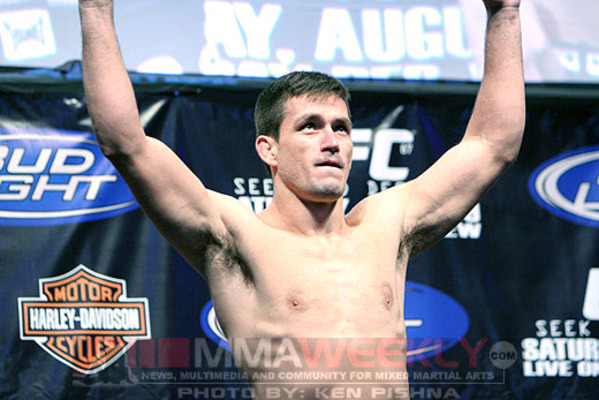 Fighting for a major organization has made Demian Maia ineligible for regional rankings.

Born in Sao Paulo, Brazil, Brazilian Jiu-Jitsu master Demian Maia began his life in the martial arts studying the disciplines of Judo, Kung Fu and Karate. He was introduced to BJJ at the age of nineteen and would go on to become one of the world’s greatest ground experts, garnering fame by winning titles in most of the world’s premier grappling and sport Jiu-Jitsu events.

Unlike some Jiu-Jitsu wizards who have failed to cross over into mainstream MMA, Maia’s transition to mixed martial arts was an unparalleled success. After running his record to a quick 6-0 in local promotions, not only did Maia gain entrance into the world’s premier MMA promotion, the Ultimate Fighting Championship, but he continued to reel off wins against many of the promotion’s high profile names, including Nate Quarry, Ed Herman and Chael Sonnen, finishing all of them on the ground. His match with Sonnen was Sonnen's first since besting WEC Middleweight Champion Paulo Filho in a non-title bout. As predicted, the well decorated wrestler took Maia down, but Maia was able to quickly lock up a triangle choke and get the tap at 2:37 of the first round. During this early streak he also gained submission of the night awards against Ryan Jensen and Jason MacDonald.

After Maia’s win over Sonnen in February 2009 he stood at 5-0 in the Octagon, with all five wins by choke. Maia was hailed as the greatest functional grappler in modern day MMA. While he boasted some basic striking proficiency, it was clear the lynchpin of Maia's game was his submission prowess. Maia fought with a pure, old-school BJJ many thought no longer existed in the UFC, electing on some occasions to pull guard against excellent wrestlers and then successfully sweep them. His wins were elegant and beautiful and, in modern day MMA, increasingly unusual in their style.

Maia stumbled thereafter against two of the world’s best middleweights, Nate Marquardt and 185 lb. champion Anderson "The Spider" Silva. Marquardt finished Maia early with a crushing one punch blow, whereas Silva took a lackluster decision from him in a highly criticized fight at Abu Dhabi that Maia did his best to make competitive. While Maia showed the best boxing of his career in his fight against Dan Miller, it was questionable whether his ground-oriented style would continue to pay dividends as he fought the very best in the world. Maia would go on to win decisions over Kendall Grove and Mario Miranda. He then split a pair of decisions with Mark Munoz and Jorge Santiago. He was scheduled to face Michael Bisping at UFC on Fox 2, but a late reshuffling of the card saw him being matched with the late addition Chris Weidman.

Following his unanimous decision defeat at the hands of undefeated middleweight prospect Chris Weidman, Maia had decided to move down to welterweight. His debut at the new weight class came against Dong Hyun Kim at UFC 148. Maia made immediate waves in the division as he won the fight at 47 seconds into the first round by way of a TKO (injury to Kim). He would face Rick Story at UFC 153 and submit him in the very first round, proving that he could make an impact on the welterweight division. He had now finished both his opponents at welterweight as opposed to middleweight where he had not finished anyone since his 2009 submission of Chael Sonnen.

Maia would once again show that he might be a force to be reckoned with at welterweight when he beat Jon Fitch at his own game, man handling him for three rounds to coast to a unanimous decision victory. This win moved Maia up the ladder in his new weight class. He had called out Tarec Saffiediene, but would end up fighting Jake Shields as the main event of UFC Fight Night 29. Although he was the favorite going into the fight, Maia would end up losing many of the grappling exchanges and lose a lack luster split decision. He next took on Rory MacDonald at UFC 170. Although he was able to dominate the first round on the ground, nearly twenty of his takedowns were stuffed in the remainder of the fight and MacDonald was able to dominate the standup with leg kicks and rangy punches, resulting in a unanimous decision loss for Maia. Their fight would win "Fight of the Night".

A highlight video of Demian Maia's best action in the Octagon.