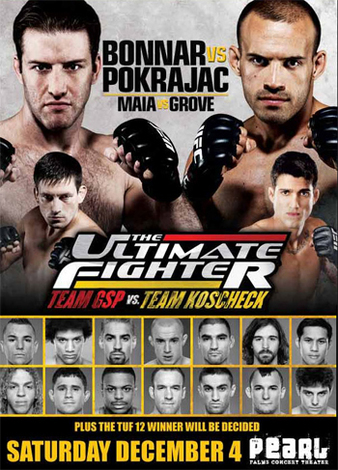 Tapology members can make predictions for upcoming MMA & Boxing fights. The Ultimate Fighter 12 Finale is closed for new predictions. 81 total members made predictions on this event, breaking down as follows below.

Leaderboard of the best predictions by member: The Ultimate Fighter 12 Finale Leaderboard

Jonathan Brookins and Michael Johnson from Team GSP would face off to decide who was the Ultimate Fighter. Brookins would take home the victory with a Unanimous Decision victory. Leonard Garcia and Nam Phan also had a great battle in a Fight of the Night that Garcia won by Split Decision. Cody McKenzie would take home Submission of the Night finishing Aaron Wilkinson with his signature The McKenzietine. Pablo Garza took home Knockout of the Night with his first round flying knee victory over Fredson Paixao.