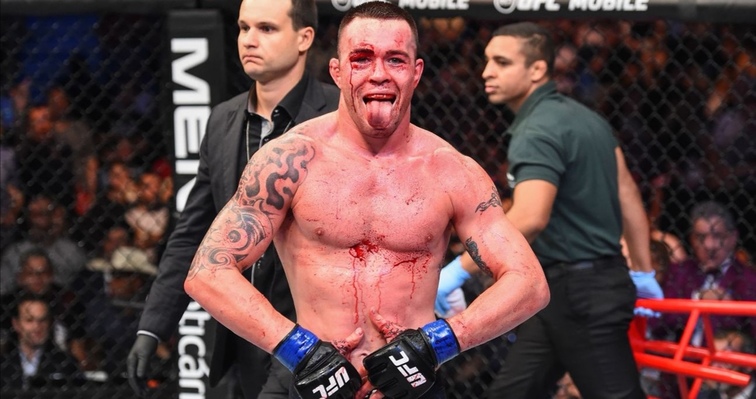 Fighting for a major organization has made Colby Covington ineligible for regional rankings.

Covington's college wrestling carreer began at Fort Dodge and Iowa Central Community College where he won the national junior college championship at 165 lbs with a 34-0 record.  That year he finishished third in the prestigious Midlands Championships -- the first freshman ever to finish that high in the tournament.

Covington's sophomore year led him to the University of Iowa, but a charge of DUI and eluding police suspended his wrestling priviliges.  Covington would later look back at this incident as a "life-time low".  Redshirting for the remainder of the year, he saw little action to finish the 2008-2009 season. Covington left Iowa that year for Oregon State and a shot at a clean slate.  Wresting at Oregon State would lead him to become a two-time Pac-10 champion and All-American status.

Besides gaining the above mentioned accolades in college wrestling, Covington also graduated with a Bachelor's degree in Sociology in 2011.

Colby Covington would make his professional MMA debut on the 11th of February, 2012 against Chris Ensley in Midtown Throwdown 3, winning by submission. In the following 2 years Covington would work himself to a perfect 5-0 MMA record consisting of 3 submission and 2 decision victories earning him a shot in the UFC.

Covington would make his UFC debut in 2014 on UFC Fight Night: Bisping vs. Le against Wang Anying. Covington finished Anying with a first round TKO and fought a second time that year beating Wagner Silva by submission in the third round on UFC Fight Night: Shogun vs. Saint Preux. Covington's first loss would come in 2015 against Warrley Alves, Covington would get submitted by Alves in the first round on UFC 194. Earlier this year Covington beat Mike Pyle by decision.

After Covington's loss against Warrley Alves, Covington went on an impressive 7 fight win streak over a period of 4 years and 2 days, especially the last 2 years of this period were very eventful. After building an impressive 12-1 record (7-1 in the UFC) Covington got told by Dan Lambert in 2017 that he would be cut by the UFC as the UFC did not like his character and fighting style. This lead to one of the most infamous moments in recent welterweight history. Up to this point the Colby as we know him today was non-existent, Covington was a regular, talented, hard working fighter but was not as prominent or entertaining on "the mic" as others and did not have a wild unorthodox striking based approach, therefore the UFC did not seem to see a potential superstar in Covington. This all changed on the 28th of October, 2017 in Sao Paulo Brazil. After beating Demian Maia in front of thousands of Brazilians, Covington did something that changed his entire image and career, he turned heel.

Covington would go on to lose his title fight against Usman in a fight of the night performance on the 14th of December, 2019. Ever since his title shot Covington has only fought once in 2020 against Tyron Woodley, a fight with a political undertone which lead to another opportunity for Covington to play his cards regarding his public persona and media attention. Covington would win his fight against Woodley by a well documented 5th round TKO by rib injury and retain his status as one of the elite welterweight contenders in the UFC.