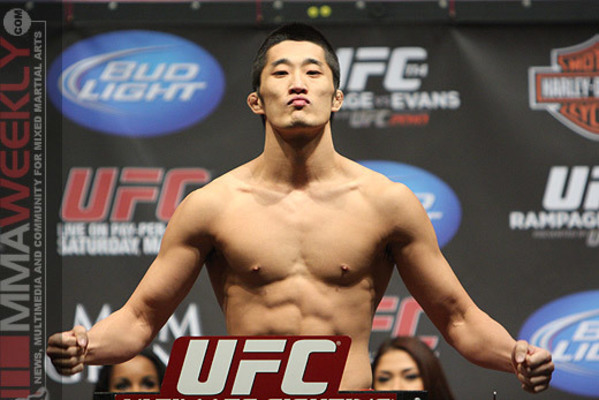 Dong Hyun Kim is ineligible for regional rankings due to inactivity.
Fighters must have at least one completed MMA bout in the past two years to be ranked.

A 4th dan Black Belt in traditional Judo, “Stun Gun” Dong Hyun Kim is an MMA fighter competing in the deep talent pool of the UFC’s welterweight division. After starting his career off at 2-0 in 2004, Kim briefly retired from the sport in 2005, citing insufficient compensation. In 2006, he resumed his career after reigniting his interest in Judo training. He won his next several bouts in the premiere Japanese promotion, Deep, before joining the UFC in 2008. He holds notable wins over Matt Brown, Amir Sodallah, TJ Grant, Nate Diaz, and Paulo Thiago. Until his loss to Carlos Condit, he was undefeated in his seven year career.

Although he lost a controversial Split Decision to Karo Parisyan in 2009 (the bout was later overturned to a No Contest after Parisyan tested positive for painkillers), Kim has been almost flawless to date in his UFC career. He combines his long, rangy physique and surprising physical strength with skilled grappling and an unorthodox traditional Judo style. His win over Amir Sodallah was an underappreciated display of grappling beauty and simplicity, in which he repeatedly utilized single-leg takedowns and guard passing to completely neutralize Sadollah's Muay Thai.

The origins of Kim’s UFC contract are somewhat unique, as he was only offered the contract after signing with the now-defunct Pride Fighting Championships in 2007, which the UFC dismantled that same year. He is considered an important component of the UFC’s desire to hold live events in South Korea in the near future, as he is very popular in his South Korean homeland.

After suffering a loss at UFC 148 at the hands of Demian Maia, which he blames a muscle spasm for, Kim went on to face and dominate (one judge scoring it 30-26) BJJ black belt Paulo Thiago. Kim looked to keep the momentum going at UFC on FUEL TV 8: Silva vs. Stann when he went into the octagon against dangerous long time Golden Glory member, Siyar Bahadurzada. Kim would use his superior grappling to earn a Unanimous Decision victory against the dangerous striker.

Kim looked to keep building momentum when he took on top prospect, Erick Silva, at UFC Fight Night 29. Kim was behind for much of the fight but was able knock Silva out and win the fight. For his effort, he was awarded the Knockout of the Night bonus. He would follow that up with a Performance of the Night bonus for a spinning back elbow TKO over John Hathaway.

Geraldo de Freitas is 31 today! Send him a Tweet.