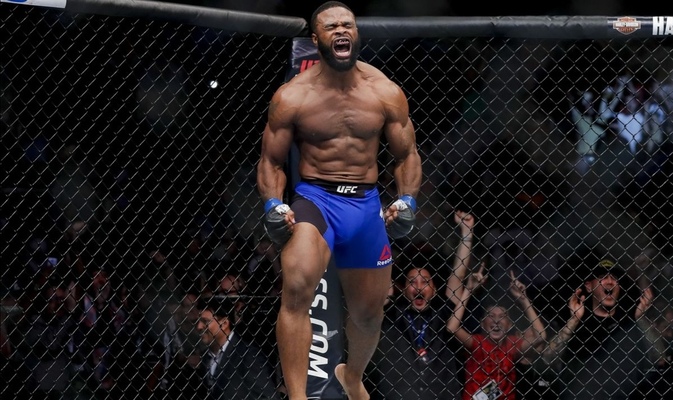 Fighting for a major organization has made Tyron Woodley ineligible for regional rankings.

Woodley tried out for The Ultimate Fighter 9 as an amateur and was one of the final cuts before the show started.

Woodley would then face Nathan Coy six months later, Woodley would take Coy down just over 10 seconds into the fight and keep him there for a bit attempting a multitude of chokes but Coy made it back up and managed to press Tyron against the fence and would keep him there for most of the round, round two was more of the same but Woodley landed some nice shtos on Coy. Coy threw a head kick around the 3 minute mark of the round which made him slip and fall and Woodley took fall advantage mounting Coy and trying to finish the fight, Coy weathered the storm and made it to the third round. Half way through the third Coy managed to take Woodley down and had him there for the last half of the round. Woodley managed to weather the storm and would win the split decision against Coy, improving his record to 6-0.

Tyron would then go on to knock Andre Galvao out in the first round of their matchup at Strikeforce: Diaz VS Noons 2. Woodley would then manage to defeat both Tarec Saffiedine and Paul Daley via unanimous decision back to back before he fought Jordan Mein for the next shot at the vacant strikefroce belt, he would defeat Mein via split decision and secure a date with Nate Marquardt for the title left vacant after Nick Diaz joined the UFC.

His fight with Nate Marquardt for the vacant strikeforce welterweight title would take place at Strikeforce: Rockhold VS Kennedy, where the pairing would serve as the co-main event.

In this fight Woodley chose to switch stances in attempt to surprise Marquardt with different angles of punches. However, the veteran Marquardt  was well prepared for the different stances, while the less experienced Woodley was less ready to defend from these new positions. Marquardt was able to rock Woodley several times whenever the switch was attempted, before scoring the knockout in the fourth round. This would be Woodleys first defeat but he would bounce back half a year later as he would sign with the UFC and take on Jay Hieron who he would knock out in just over 30 seconds, making his debut one for the ages.

Following his KO debut of Hieron, Woodley would end up on the wrong side of a split decision loss to former strikeforce champ Jake Shields at UFC 161: Evans vs. Henderson but he would once again bounce back with a stunning KO as he would knock out a former title challenger in Josh Koscheck, a finish which would earn him knockout of the night honors.

He would then face the former UFC interim welterweight champion and the former WEC welterweight champion, Carlos Condit at UFC 171: Hendricks vs. Lawler. Woodley would find a lot of early success, connecting with some heavy shots and taking Condit down a few times in the first round. In the second round Woodley would take Condit down and you could tell on his face that something had happened, Carlos was grimacing, when the fight got back to the feet, Woodley connected with a leg kick that buckled Condits knee and the fight was stopped. Woodley won the fight via TKO in the second round. Woodley would then look to get closer to a title shot as he took on Rory MacDonald at UFC 174: Johnson vs. Bagautinov but he would end up on the wrong end of a unanimous decision. Woodley would not waste any time tho as he would come in just two months later as the short notice replacement for Hector Lombard against Dong Hyun Kim at UFC Fight Night 48. He knocked Dong out one minute and a second into the first round earning himself another performance bonus.

Woodley would then take on the Ultimate Fighter Season 17 winner Kelvin Gastelum where he would once again find himself in a split decision, this time on the right side of one. The win over Kelvin was enough to earn Tyron a shot at the welterweight title against the reigning champion Robbie Lawler at UFC 201. After fighting on Lawlers undercard multiple times he would now headline a ppv against him. Just over 2 minutes into the first round, Woodley catch Lawler with a right hand that would drop the champion and Tyron would then swarm him forcing the referee to stop the fight. Woodley earnt the welterweight title and added another scalp to his growing list of impressive wins. In his first title defense, Woodley would take on Stephen Thompson, the pair would go to a majority draw, with Woodley winning on one scorecard. Since the fight ended in a draw, Woodley would retain the belt but the pair would be matched up again 4 months later, this time in a snoozefest that earnt Woodley a majority decision with one judge once again scoring the fight a draw. Tyron would once again retain his belt and would go on to defend against Demian Maia. In what was yet another boring decision win for "The Chosen One". Woodley would then take on Darren Till in what ended up being another relatively boring fight, but this time it was the fault of the challenger who didn't land a single strike in the entire fight, Woodley would knock Till down in the second round before choking him out.

Following his win over Darren Till, Woodley would take on Kamaru Usman to try and make it 5 defenses in a row but Usman would hand it to the champion, dominating the entire fight, even earning a 10-8 on two scorecards in round 4. After losing his title, Woodley would try to bounce back as he was scheduled to take on Robbie Lawler in a rematch but Woodley was forced out due to a hand injury, he would then try to take on Leon Edwards but due to the Covid-19 Pandemic the fight had to be cancelled. After more than a year gone from the sport, Woodley would finally make his return, against the surging contender Gilbert Burns. Woodley would once again be dominated, losing every round of the fight and once again have two judges score a round 10-8 for Burns.

Following these back to back losses, Tyron would take on Colby Covington in a fight which felt like more of the same, with Tyron once again being dominated, this time however the fight would not make it to a decision as Tyron would hurt his rib in the fifth round which meant that the fight ended in a TKO win for Colby "Chaos" Covington. Half a year later Woodley would be back again, this time taking on Vicente Luque at UFC 260. This time Woodley did find some success as he landed a good shot on Vicente but the success wouldn't last long as Luque would choke the former champion out in the first round. After losing 16 rounds in a row, Tyron Woodley was let go from the UFC.

Woodley would then get into beef with youtube star and celebrity boxer Jake Paul after Jake knocked out Woodleys friend, Ben Askren. Woodley and Paul would meet in the boxing ring at Paul vs. Woodley. Woodley had the entire MMA community rooting for him as he stepped into that Ring. However as the first few rounds passed it became increasingly obvious that Woodley was still the same gun shy guy that he had showed to be in his last few fights. He threw very little throughout the first few rounds but when he did land it landed well. In the fourth round Woodley would hit Paul with a good shot that sent the undefeated celebrity boxer to the ropes, with that being the only thing holding him up, however this was oddly enough not scored a knockdown. Woodley would not try to go for the finish, even as the fight got closer and closer to the end. In the eighth round Paul was tired but Woodley was unable to stop Paul and so he went on to lose a split decision, letting the entire MMA community down.

Tyron "The Chosen One" Woodley was once a great fighter but the fire inside him as died and that became evident in his past 5 fights but Tyron should be remembered for the man that he once was and not for the gun shy fighter he became.