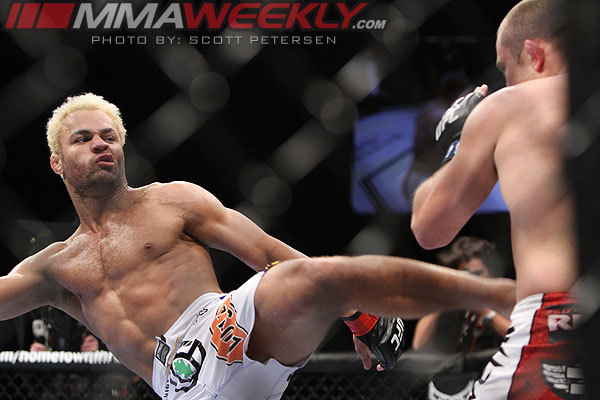 #60
Greatest MMA Grappler of All Time

Josh Koscheck is ineligible for regional rankings due to inactivity.
Fighters must have at least one completed MMA bout in the past two years to be ranked.

Welterweight UFC fighter Josh Koscheck is one of the promotion’s top athletes and, in many people’s eyes, a glimpse at the future composition of an elite MMA warrior. Koscheck began his mixed martial arts career as a virtually one-dimensional fighter, possessing an extraordinary pedigree in collegiate wrestling – Koscheck was a four time NCAA All-American – and next to no additional martial arts knowledge. From that starting point, Koscheck worked tirelessly at San Jose, California’s American Kickboxing Academy to transform himself into a complete martial artist with a highly combustible striking game and a set of submission skills sufficient to choke out Pete Spratt, Ansar Chalangov and, most notably, the fast-rising Anthony Johnson. As a result of hard work, self-discipline and extraordinary athleticism, the “mere” wrestler now boasts some of the UFC’s most replayed knockouts.

Koschek’s first serious disappointment inside the cage came in his August 2007 bout against welterweight kingpin Georges St. Pierre at UFC 74, in a fight in which St-Pierre first displayed the extraordinary wrestling that has since come to define him. Koscheck was neutralized and unprepared for adapting to a superior display of wrestling from another fighter, a feat many thought impossible. Koscheck had conceded on more than one occasion that he was rarely training his wrestling in an all-out effort to raise his striking, and the mistake cost him. Koscheck would rebound from the loss with back to back wins over Dustin Hazelett (TKO) at UFC 82 and Chris Lytle (Decision) at UFC 86. However, Koscheck would drop a unanimous decision to Thiago Alves at UFC 90, halting Koscheck's re-ascension and giving Alves a shot at the welterweight title.

Koscheck would rebound with a Knockout of the Night performance against Yoshiyuki Yoshida at UFN 16: Fight For The Troops, which featured a Tekken-like finish on Japan’s Yoshida, who was too stunned to cover up as Koscheck delivered a final overhand right with all his might. In Koscheck's next fight, he would lose to Paulo Thiago by knockout at UFC 95. The fight did not end without controversy as Koscheck argued that he did not lose consciousness. Again, Koscheck rebounded from the defeat with a TKO win over UFC veteran and former title contender, Frank Trigg at UFC 103, followed by a dual Fight of the Night  (FOTN and SOTN) bonus RNC victory over Anthony Johnson at UFC 106.

The back to back wins gave Koscheck a title eliminator fight against British striker Paul Daley, where the winner would not only receive a title shot, but the opportunity to coach opposite UFC Welterweight Champion, Georges St. Pierre on The Ultimate Fighter. Koscheck would win the fight via unanimous decision. At the conclusion of the fight, Daley, frustrated by the loss, proceeded over to Koscheck's corner and delivered a sucker punch. A move which ended Daley's career with the UFC.

At the conclusion of The Ultimate Fighter 12 season, Koscheck fought St. Pierre at UFC 124 in a mostly stand up fight. St. Pierre repeatedly used his jab and severely damaged Koscheck's right eye, giving St. Pierre a unanimous decision victory. As he has repeatedly done in the past, Koscheck rebounded at UFC 135 with a 1st round KO win over former UFC Welterweight Champion, Matt Hughes, followed by a split decision victory over Mike Pierce at UFC 143.

Riding the momentum of back to back wins, Koscheck faced fast-rising welterweight contender, Johny Hendricks at UFC on FOX 3. Koscheck would lose a razor thin split decision. In his next fight, Koscheck fought Strikeforce import Robbie Lawler, who was making a return to welterweight. Koscheck was able to take Lawler down before Lawler reversed the position and landed heavy ground and pound, receiving a referee stoppage, giving Koscheck back to back losses for the first time in his MMA career. He would lose his third straight fight when he was TKO'd by Tyron Woodley.

In his most recent fight Koscheck faced fellow UFC veteran Jake Ellenberger at UFC 184: Rousey vs. Zingano. Round 1 started off with a slow pace, but Koscheck found himself being controlled with Ellenberger's superior striking. In Round 2, Ellenberger was able to lock in a guillotine choke, which turned into a North-South choke. After several attempts to get out of the choke, Koscheck eventually tapped.

After Ben Saunders pulled out of his fight against Erick Silva at UFC Fight Night 62: Maia vs. LaFlare, citing injury, Koscheck stepped up to fill in for the injury fighter with a two week notice and save the fight. With such a short notice and with his performance against Ellenberger only a shadow of his former self, this seems that it is Silva's fight to lose.

Interview  |  Behind the Lens with Josh Koscheck report dead link

Watch this video interview with Josh Koscheck from Fight! Magazine.