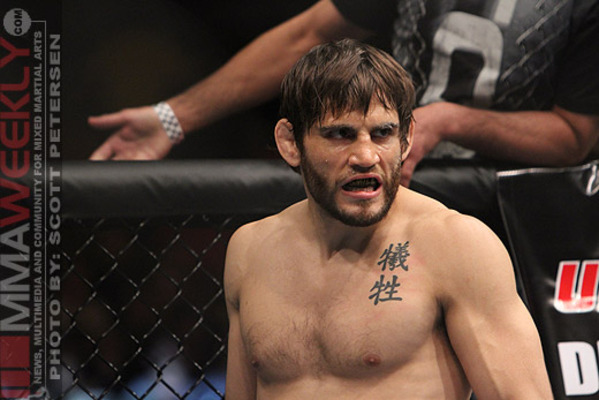 #33
Greatest MMA Grappler of All Time

Fighting for a major organization has made Jon Fitch ineligible for regional rankings.

Prior to establishing himself as one of the premier welterweights in the world today, Jon Fitch had to overcome a rocky start to his professional fighting career. He lost two of his first four MMA fights—one by Rear Naked Choke, the other by knockout—before embarking on an unbelievable 16-fight winning streak, including eight in a row in the UFC, before finally challenging for the title in 2008. After defeating Brock Larson in his UFC debut in 2005, Jon Fitch went on to dominate such fighters as Josh Burkman, whom he finished with a Rear Naked Choke, Thiago Alves, whom he knocked out, Roan Carneiro, and Diego Sanchez before losing a spirited effort to champion Georges St. Pierre in August of 2008. Since the loss to St. Pierre, Fitch has jumped right back on the winning wagon, defeating fighters Akihiro Gono, Paulo Thiago, Ben Saunders, and Mike Pierce by decision.

Although he possesses high level submission and striking skills, Fitch is first and foremost the model of a “grinder.” The majority of his professional wins have come by way of tough, smothering decisions. Fitch has never finished a UFC fight inside of the first round, and he is not known for his aggressive risk taking. However, the former Purdue University “Boilermaker” is virtually unparalleled in his ability to get inside, clinch his opponents, and shut down their offense while imposing one of the most stubborn and dominant wrestling games in the sport. His fights can look like carbon copies of one another despite his opponents’ various skillsets and physiques, simply because of Fitch’s unwavering ability to implement his gameplan. The plan obviously works, as Fitch is now knocking on the door of the all-time UFC wins record.

At UFC 141, Fitch suffered his first professional loss in over 3 years as fellow welterweight contender Johny Hendricks defeated him by way of knock out at 12 seconds of the first round. Fitch would rebound from the loss with a Unanimous Decision victory over quickly rising prospect Erick Silva and also earning Fight of the Night honors.

Fitch would then face jiu-jitsu ace Demian Maia at UFC 156: Aldo vs Edgar. Fitch would lose the fight by Unanimous Decision. It was later announced to the surprise of many that Fitch was being cut from the promotion. He would quickly land a gig with the World Series of Fighting and is now set to face Josh Burkman as the main event for WSOF 3.

Fitch was quickly dropped by Burkman and choked unconscious via guillotine choke at 41 seconds into the bout. This marked the second time Fitch has been submitted in MMA competition with the first succumbing to Mike Pyle in his pro debut.

A fight against Marcelo Alfaya was set for WSOF 6. A back and forth bout ended with Fitch getting the judges approval via split-decision.

In Fitch's third fight for WSOF, he was slated to fight former UFC title-contender Dennis Hallman. The bout was contested at middleweight in which Fitch won a unanimous decision.

After a scrapped scheduled fight against Jake Shields, Fitch was given a title shot against Rousimar Palhares at WSOF 16 with the champion to face the number one contender from the winner of Jake Shields versus Brian Foster. Fitch would go on to lose via a knee bar in the first round marking his 3rd time being submitted in over 10 years of competition.

Jon Fitch speaks with Fight! Magazine about his hatred of fighting to a decision.