"Thunder of the North" 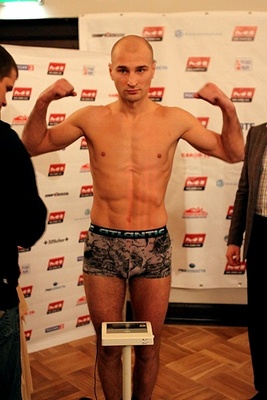 Fighting for a major organization has made Alexander Yakovlev ineligible for regional rankings.

Sultan Tikhaev, better known as Alexander Yakovlev, is a Russian mixed martial artist and rapper. Yakovlev is recognized as an aggressive welterweight competitor who’s competed in the M-1 Global, Pro FC, Shooto Russia, and Bodog Fight promotions. Yakovlev’s martial arts background included training in Sambo and wrestling prior to turning his attention to professional fighting at the age of nineteen. He has earned Master of Sport designations in Sport Sambo, Combat Sambo, Freestyle Wrestling, and Hand-To-Hand-Combat. He is also a musician and has released three rap albums.

He was signed to the UFC in 2014 but would drop his first two fights for the promotion, both by decision to Demian Maia and Nico Musoke. He rebounded by picking up two consecutive victories one by unanimous decision versus Gray Maynard and the other due to first round stoppage due to punches over George Sullivan. The pair of victories found him matched up against the rising prospect and future champion Kamaru Usman which resulted in a Unanimous decision loss. He would split the following two fights by way of submission first in a losing effort to Zak Cummings via first round arm bar and then rebounding with a guillotine choke over Alex da Silva. Another match with a rising prospect found him loosing one against Roosevelt Roberts. Overall his record with the promotion sits at 3-5 leading in to his matchup with Joel Alvarez.