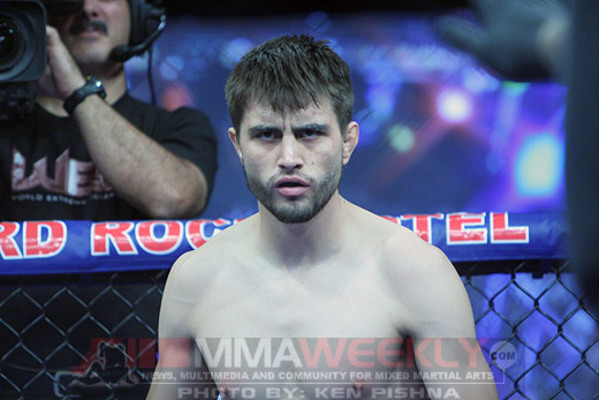 Fighting for a major organization has made Carlos Condit ineligible for regional rankings.

Carlos Condit began fighting professionally in 2002, running his record to an impressive 18-4, including a Triangle Armbar submission victory over Frank Trigg, before making his debut for the WEC promotion in 2007. In his first fight with the promotion, a Rear Naked Choke victory over Kyle Jensen, Condit emerged as a contender to the welterweight title, which he won with a first-round Armbar of John Alessio. Condit went on to defend the belt three times, finishing Brock Larson in the process, before the WEC officially disbanded its welterweight division in 2009, sending Condit to the UFC. Up until that point Condit was considered one of the top fighters in the WEC and potentially one of the world’s best welterweights, but was effectively forced to start again at the bottom of the rankings upon joining the world's most stacked welterweight division.

Condit lost his first UFC fight to Martin Kampmann by Split Decision, but rebounded with a Split Decision victory over Jake Ellenberger. Both decisions are somewhat controversial, as many people thought both decisions could have gone either way. He then fought a dramatic, come-from-behind win in the third round against Rory MacDonald that won Fight of the Night. MacDonald had been dominating the fight, before being stopped with seven seconds left in the fight. With an October 2010 devastating knockout victory against Dan Hardy at UFC 120, Condit demonstrated that he is still right in the mix among the division's elite competitors. At UFC 132, Condit knocked out Dong Hyun-Kim to mark back-to-back Knockout of the Night performances.

At UFC 143, Condit challenged polarizing fighter and former Strikeforce Welterweight Champion Nick Diaz, for the Interim UFC Welterweight Championship. Condit won the fight via unanimous decision. The key to the "Natural Born Killer's" victory was his ability to stick to his game plan. Condit avoided long exchanges and backing into the cage, which would have given the brawling Diaz the advantage. He also repeatedly kicked the outside of the legs of his opponent, which Diaz's boxing stance left him unable to check. The decision was considered by some to be controversial as well as a major upset. After winning the Interim Welterweight Title, Albuquerque's mayor, Richard Berry, named February 29 "Carlos Condit Day."  Carlos Condit is well-rounded, with highly technical striking and grappling expertise, a great gas tank, and as his name rightly implies, a killer instinct.

Condit then waited 9 months for the for his chance to unify the welterweight titles. He was then slated to fight returning welterweight champion Georges St. Pierre at UFC 154. However, Condit's bid to dethrone the long time welterweight kingpin was unsuccessful as St. Pierre took home a unanimous decision victory. Following the loss Condit would drop a second straight at the hands of Johny Hendricks marking the first time in his career he lost back to back fights. He would get back in the win column at UFC Fight Night 27 and also get revenge in a rematch with Martin Kampmann. After losing the first round to Kampmann he would make the right adjustments and start to take control of the fight eventually finishing Kampmann by TKO in the fourth round. The fight would also earn Fight of the Night honors for both fighters.

Condit's next fight would be against Tyron Woodley at UFC 171, with a good performance by the winner it was expected they may get a title shot. Woodley controlled the first round of the fight and while getting a takedown in the 2nd Condit yelled in pain. Back on the feet, Woodley landed a leg kick Condit's opposite leg buckled, sending him crashing to the canvas in agony and ending the fight.

The week after the bout, Condit's longtime trainer Greg Jackson confirmed that the fighter had torn his ACL in the loss.