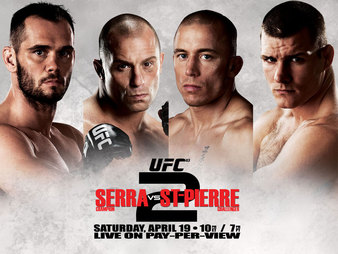 #69
Greatest Event of All Time

After losing his first title defense to heavy underdog Matt Serra in 2007, Canada’s own Georges St-Pierre had rallied with back-to-back wins over Josh Koscheck and Matt Hughes to earn his 2008 rematch, almost exactly one year after his title loss. In the main event, St-Pierre dominated Serra from start to finish and took back his Welterweight Championship with a second-round TKO in front of a raucous Montreal crowd. St-Pierre later stated that this was the single greatest night of his career.

The event marked the UFC’s official debut on Canadian soil, and it drew the largest crowd in the promotion’s history at the time. The title fight between St-Pierre and Serra was preceded by serious trash talk, as both fighters had been angered by their opponent’s comments to the media in the preceding months.