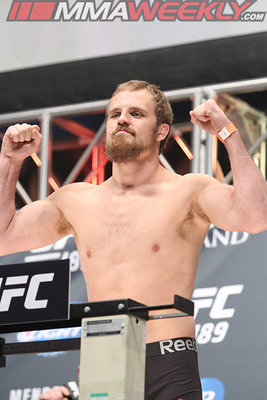 Fighting for a major organization has made Gunnar Nelson ineligible for regional rankings.

The Iceland native is a world class Brazilian Jiu Jitsu practitioner who received his black belt from Renzo Gracie in 2009. Nelson competed in multiple ADCC tournaments with great success. He also holds a black belt in Gōjū-ryū which is a style of Karate. Gunnar fought for the first time in MMA in 2007 fighting to a draw. After that he would win his next five fights before taking a break from the MMA game. He would return in 2010 and win three more times before taking another break. In February of 2012 he would return to the sport finishing his opponent with an arm-bar in the first round.

Nelson would make his UFC debut at UFC on Fuel TV 5 against Damarques Johnson. Nelson submitted Johnson via rear naked choke in the first round proving that he could be a new prospect to keep an eye on.

At UFC on Fuel: Barao vs McDonald, Nelson's stock would only rise. Nelson would come out victorious with a unanimous decision victory over former Sengoku Middleweight Champion, Jorge Santiago with judges scores of 29-28, 29-28, 30-27. His next test would be against Omari Akhmedov at UFC Fight Night 17. He would finish him in the first round with a guillotine choke also earning the Performance of the Night bonus. He would pick up another Performance of the Night bonus when he submitted Zak Cummings in the second round with a rear naked choke. In his next bout however the highly touted prospect would drop a Split Decision to Rick Story marking the first loss in his professional career.