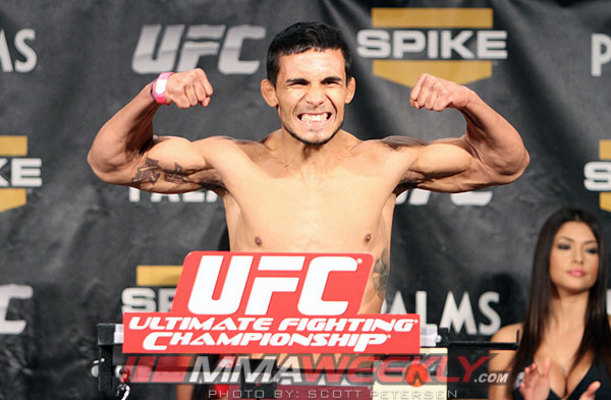 Dennis Bermudez is ineligible for regional rankings due to inactivity.
Fighters must have at least one completed MMA bout in the past two years to be ranked.

Dennis Bermudez is an American featherweight fighter currently signed to the UFC. He trains out of Long Island MMA in Farmingdale, New York. He began wrestling in 2000 and earned a high school record of 112 wins and 23 losses. He went on to wrestle for Bloomsburg University in college where in 2007, he was ranked 22nd in the nation for Division 1 wrestlers. He previously has fought for M-1 and was a finalist on season 14 of The Ultimate Fighter. He holds notable wins over Shannon Gugerty, Pablo Garza, Matt Grice and Max Holloway. Dennis has earned the UFC "Fight of the Night" bonus two times, the "Submission of the Night" bonus one time and was awarded "Submission of the Season" for TUF 14. Of his twelve wins, five have been finishes including three T/KOs.

Bermudez began his amateur MMA career in 2009 and won all 4 of his fights before turning professional. He would win his first 7 fights before losing back to back fights to Drew Fickett and Jordan Rinaldi. In 2011 Bermudez would try out for the fourteenth season of The Ultimate Fighter Team Bisping vs. Team Miller. He would defeat the then King Of The Cage champion Jimmie Rivera in the second round by TKO to gain entry into the house. He was the first pick for Team Miller and in his first fight, he would TKO Stephen Bass in the second round. His next match up would come against Akira Corassani who he would submit and also win $25,000 for the "Submission of the Season". He would face Diego Brandao in the finals and despite controlling much of the fight, even rocking Brandao and landing ground and pound but would get caught in an armbar with only nine second left in the first round. He would however get a bonus for "Fight of the Night".

Despite being on a three fight losing streak, Dennis was kept on by the UFC. Since the loss Bermudez is on a 4 fight win streak with victories over Pablo Garza, Tommy Hayden, Matt Grice, and Max Holloway. He would win "Submission of the Night" honors for his victory over Hayden and another "Fight of the Night" bonus for his epic back and forth battle with Grice. He next fought Steven Siler at UFC: Fight for the Troops 3 and was able to pick up a unanimous decision. He would continue his streak picking up his 6th straight when he was able to TKO Jimy Hettes in the third round of UFC 171. The finish would also earn him Performance of the Night.

Episode 8 Bermudez def. Akira Corassani by Guillotine Choke at 3:12 of Round 1

The Ultimate Fighter 14 Finale Diego Brandao def. Bermudez by Armbar at 4:51 of Round 1

On Saturday January 19, 2019 Dennis bermudez faced off against Te Edwards

After winning the fight Bermudez officially retired from the sport of mma at the age of only 32.