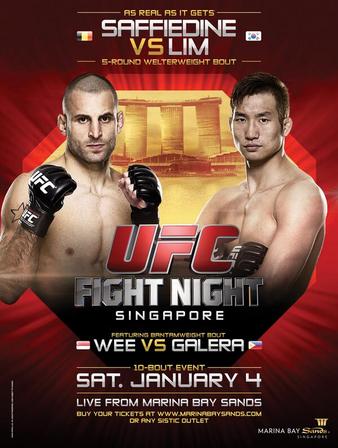 Tapology members can make predictions for upcoming MMA & Boxing fights. UFC Fight Night 34 is closed for new predictions. 1,192 total members made predictions on this event, breaking down as follows below.

This was the first event on the UFC's new UFC Fight Pass digital subscription service. The company announced that approximately 12 events a year would be live on the network. The events will primarily be overseas cards that have times lots that are not compatible with American networks. Additionally, the service will have an on demand menu to view old footage.

The main event was initially announced as Jake Ellenberger vs Tarec Saffiedine, but a hamstring injury forced Ellenberger off of the card. He was quickly replaced by Hyun Gyu Lim who was pulled from his bout on the same card.

The card has received some criticism for the lack of name talent on it. Only five of the twenty fighters on this card have previously fought for the UFC and among them, they have a combined 6-6 record in the promotion. Ultimately, the debuters would pick up eight wins total and went 2-3 against fighters who had previously fought for the promotion. All three Hawaiian picked up wins.

Fight of the Night: Saffiedine vs Lim

Submission of the Night: Doane

Knockout of the Night: Holloway

Watch the stars of UFC Singapore discuss their epic wins and losses.

Watch the fighters hit mits and discuss their UFC debuts ahead of UFC Fight Night: Singapore.